Kirby 100: Prisoner of the 5th Dimension

The Human Torch steps up against an entire realm of invading evil!

Many people think of Johnny Storm—aka The Human Torch—as the young, impetuous member of the Fantastic Four who would rather work on hot rods than take things too seriously. But, did you know that, in STRANGE TALES #103 by Stan Lee and Jack Kirby, he stopped an invasion from another dimension all by himself?

Upon arriving at school, Johnny overheard some kids talking about how a series of houses built by a man named Bentley kept sinking into the supposedly reinforced swamp land they’d been built upon. All of this mystified Bentley and his crew who had taken precautions to solidify the base of these domiciles safely. An old man appeared out of nowhere to inform them that the Swamp Demons had decided to get even with the builders for invading their home.

This warranted the attention of the Fantastic Four, though Mr. Fantastic told Johnny that he’d have to investigate this one solo. Upon arriving on site, Torch burned his way under the marsh and saw that the land looked solid enough. Storm stuck around the swamp until dark when he spied a trio skulking his way. He recognized the old man, but not his two alien-looking companions. Right before his eyes, the newcomers used an electro-gamma ray gun to disrupt the soil and sink another house! 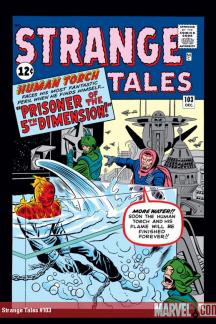 The duo vanished right before our hero’s eyes, so he jumped out to confront the elderly fellow who then pulled off a mask to reveal himself as one of the aliens as well! After a blast of anti-matter electrons shorted out his powers, Johnny found himself transported to the invaders’ home in the 5th Dimension! There, Storm met their ruler and warlord Zemu, who revealed that they planned to invade Earth and needed to keep the swamp clear of humans so they wouldn’t stumble upon the portal entrance. They then chained the Torch up in a water tank to keep him from flaming on.

Johnny would have been stuck there too had it not been for a woman named Valeria who hypnotized the guard and freed the do-gooder. Once safe, she and her people revealed themselves as Zemu’s opposition. Torch quickly signed on to fight alongside them against their common enemy and lived up to his fiery name by burning through as many of Zemu’s weapons as possible. The warlord upped his own game by sending out his fireproof giant tank corps. Johnny whipped up a super tornado to take out these new war machines and then soared into the sky with a message of rebellion against Zemu for the denizens of this dimension.

It didn’t take long for them to respond in kind and finally topple the tyranny of Zemu. With this adventure wrapped up, Johnny returned to his own dimension where he did what all conquering heroes do: head back to high school!