Kirby 100: Return of The Red Skull

Captain America locks horns once more with his arch-nemesis!

Jack Kirby legendarily shouldered all of the penciling responsibilities when it came to CAPTAIN AMERICA COMICS #1 back in 1941. That issue not only concisely introduced the world to Cap and Bucky, but also their number one villain, The Red Skull. In CAPTAIN AMERICA COMICS #3, writer Joe Simon and Kirby brought the soon-to-be stalwart villain back into our heroes’ lives. Just look at that maniacal look on the Skull’s face as seen on the cover as he tied Bucky to a bomb right next to the already-trapped Betty Ross whilst Captain America valiantly busts in to free his friends!

For a quick reminder, the first Red Skull seen in the Shield-Slinger’s inaugural issue turned out to be George Maxon. He used an injection drug to scare people to death, but ultimately rolled over on his own needle, seemingly overdosing in the process. However, as CAPTAIN AMERICA COMICS #3 kicked off, the man rose back up, claiming that he’d basically inoculated himself against his own drug. With that, the villain set about to gain revenge on the heroes and America itself! He got right to work by stealing plans for a U.S. made power drill and also exhibiting his new Touch of Death defense which killed anyone who came in contact with his person!

The Skull continued rolling right along with his nefarious plan as he had his minions spread word of his return, causing a wave of terror, followed immediately by an attack of the power drill that bored a hole right through a major city, killing thousands. Bucky and Cap leaped right into action, even grabbing on to the massive drill, but soon fell back when the bad guys turned their guns on our champions. Meanwhile, a carnival barker decided to capitalize on the patriotic pair’s fame and had a couple of goons dress up as them. The charlatan then charged a dime for people to come in and shake hands. 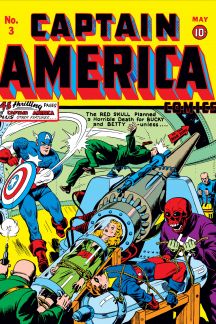 Though the real deals broke up the racket, Red Skull didn’t hear about the con and broke in with his henchmen to kidnap his supposed enemies! Unfortunately for the fill-ins, the Skull hung them just before Captain America and Bucky could get there. However, they did succeed in blowing up the mad man’s power drill with a good, old-fashioned bomb!

Kirby also drew a fun mix of anti-Nazi and horror stories called “The Hunchback of Hollywood” and “The Movie Murder,” which found our heroes investigating threats to film designed with an anti-fascist message. This one not only featured Steve Rogers dressed up as a knight in the picture, but also Cap storming a castle by way of catapult! Other issue highlights include a prose story called “Captain America Foils the Traitor’s Revenge” written by a kid named Stan Lee, another Cap and Bucky adventure called “The Queer Case of the Murdering Butterfly and the Ancient Mummies,” and a Reed Crandall-drawn Hurricane, Master of Speed tale that Simon and Kirby wrote!