The King keeps us on the edge of our seats with scintillating sci-fi!

These days, comic book titles have a tendency to start, stop, relaunch, and carry on under various titles. Back in the 50s and 60s, though, a book would move on with the times, even completely changing its format along the way, but maintain the same name. That’s what happened with TALES OF SUSPENSE, a comic that Jack Kirby had a hand in for most of it’s long run from 1959 to 1968. In that time it morphed from a sci-fi anthology to a monster-palooza and on to a full-on super hero starrer!

Kirby’s first tale in issue #2, called “Invasion From Space!,” began with a series of enormous ships suddenly appearing in the skies over Earth, drawing many eyes and questions from the people below. As citizens understandably panicked, the governments of the world decided to work together to blow this menace out of the sky even though one scientist countered, saying they had no reason to believe the visitors hostile.

After a massive joint attack on the crafts did nothing, the leaders decided to go the other way and destroy all of their major weapons in an effort to seem amenable to their potential invaders. When the ships flew off, the governments all decided to not restock their weapons and pledged to be more peaceful. But what of the dissenting scientist? As it turned out, he created the invasion as a hoax with his special dimensional projector and a series of slides magnified thousands of times over. To him, the ends of lasting world peace justified the means, which caused a panic. 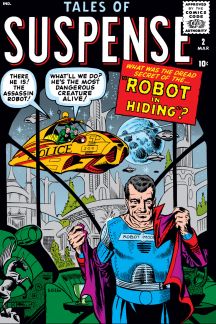 Stories like these popped up often in this era after World War II, as many wondered if a threat like the Axis powers could rise again and what it would actually take for the world to remain peaceful. Kirby and other legendary comics creators like Steve Ditko, Stan Lee, Russ Heath Jr., Joe Sinnott, and others joined in on the sci-fi tales with a message and others for just plain fun!

These yarns also introduced a legion of giant monsters, aliens, and robots from the mind of Kirby and the gang, many of whom returned in MONSTERS UNLEASHED this past year. With the likes of Monstro, Sporr, Gor-Kil, Goom, Googam, and The Thing That Crawled At Night, these issues featured plenty of creatures to menace humanity with.

With 1963’s TALES OF SUSPENSE #39 the title changed forever as it introduced Iron Man who would go on to feature in the series for the rest of the run. While Ditko drew the Lee-penned story introducing ol’ Shell Head, Kirby gave the world their first look at the character on the cover. The following year, SUSPENSE shifted from an anthology to a split book starring Iron Man and newly returned Golden Age hero Captain America. Kirby returned to drawing the monthly adventures of the patrotic character he co-created with issue #59.