Coming up with villains who could give a powerhouse like Thor a run for his money had to have been a challenge for Jack Kirby and Stan Lee as they shepherded the character along from his first appearance in JOURNEY INTO MYSTERY #83. With 1964’s JOURNEY INTO MYSTERY #105–106, they teamed up an unlikely duo who nearly defeated the Odinson!

In that story, Mr. Hyde and Cobra—who first appeared in issues #99 and #98 of the series respectively—met only after the serpentine villain fought Thor effectively with his Serpent’s Sting and Cobra Cable equipment. Knowing he shouldn’t press his luck, though, the thief ducked into a window that belonged to none other than Dr. Calvin Zabo. Sensing an intruder, the mild-mannered scientist downed a formula and quickly turned into Mr. Hyde! During the ensuing and inevitable fight between the two rogues, they came to realize they shared an enemy in a certain Thunder God and decided to team up against him!

First, the bad guys realized they needed to find Thor, so Hyde whipped up an invention called The Time Reversal Ray. After zapping someone with it, the device projected the individual’s past up on the wall for all to see. They then staged a crime that Thor responded to and soon discovered a connection between the Avenger and Dr. Donald Blake! The depraved duo then smashed their way into Blake’s office where he stood without mighty Mjolnir disguised as his humble cane. They also grabbed Jane Foster, returning to the office after ditching her date. Blake tricked them into averting their eyes and tapping the cane, which transformed him into Thor while they weren’t looking. 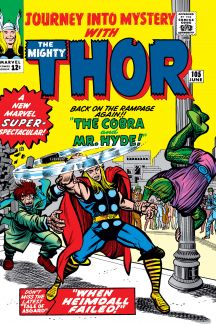 Surprised by their foe’s quick appearance, the villains made a break for it, enacting a plan B that saw Cobra slither to safety while Hyde led his quarry into the Colosseum where people flooded in and out for the Heavy Machinery Show. Unable to throw his hammer for fear of hurting innocents, Thor did his best to stop the brute’s rampage. Taking advantage of the Thunderer’s divided attention and a nearby Atomic-Powered Hydraulic Hoist, Cobra snatched Mjolnir right out of the air and deposited it into the machine’s steel-lined storage compartment!

With Thor separated from his hammer, our hero only had 60 seconds before reverting to Don Blake, and found himself facing two oncoming attackers with hatred in their eyes. With less than a minute to go, the Mighty Avenger flipped the villains on their ears and took advantage of the fleeing crowd to cover his transformation back to human form. As the police arrived outside, Blake realized that he could not get into the hoister’s storage container alone, so he tricked Hyde and Cobra into liberating it for him. He then made off into the crowd to once again change into his alter ego.

Returned to his full strength and none-too-pleased at how he’d been treated previously, Thor quickly engaged in fisticuffs with his foes, knocking Cobra for a loop and then exploding a machine near Hyde. The latter took the time to turn into Zabo, thinking it would facilitate his escape while the cops seized Cobra, but he just couldn’t let his grudge go and transformed back into Hyde to attack Thor. However, without his slippery partner around to distract the Thunder God, our hero made short work of the miscreant.

‘Thor: Love and Thunder’: New Trailer Tells the Story of the One and Only Space Viking

Check out the new out-of-this-world trailer and poster now!