Nick Fury and S.H.I.E.L.D. confront an evil combo of science and magic!

Over the years, Nick Fury amassed quite a number of enemies. Stan Lee, Jack Kirby and breakdown artist Howard Purcell introduced us to one of the more unusual ones in the pages of 1966’s STRANGE TALES #144–145: The Druid. A threat potentially more suited for series mate Doctor Strange, Druid debuted while conjuring up an image of Fury to his coven-like followers and calling for the S.H.I.E.L.D. leader’s death!

However, we quickly learned that at least some of Druid’s methods came from the world of technology instead of magic as he had a team working behind the scenes for him like a stage magician. Using these tools, the villain called for an “Egg of Satan” and sent it off to kill Nick Fury. The egg almost didn’t need to bother as the super spy had donned a protective suit to crawl through the wreckage of a plane from the previous issue in order to find the reactor. Of course, Fury would never let a little thing like potential immolation stop him and succeeded in his task!

Not long after, officials spotted the egg, but didn’t know where it came from. Following its command, the object made a beeline for Fury who happened to be driving with Dum Dum Duggan at the time. Thanks to good, old S.H.I.E.L.D. tech, the former Howling Commandos kept in the fight as the egg started blasting them with lasers. To end this particular skirmish though, our pair of World War II heroes grabbed themselves some blasters and shot the Satan’s Egg out of the sky. In the second part, another brand of S.H.I.E.L.D. standby debuted to help confuse any future egg attacks: Fury Life Model Decoys! 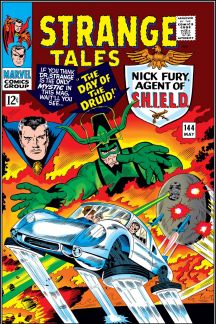 Though the LMDs attracted the eggs more than once, Druid seemed wise to the ploy and used his devices to gather information on his quarry. Not wanting the game to go on for too long, the evil mastermind revealed himself to Fury and challenged him to a fight! As Nick knocked out the leader, his fellow S.H.I.E.L.D. agents used their superior skills and tech to stop the remaining Satan’s Eggs, which had been developed into tanks and other weapons.

In the end, our heroes succeeded in not only capturing their opponent, but also putting an end to his immediate threat. The man known as Dredmund the Druid would eventually return to torment Captain America, even playing a role in the classic “Cap Wolf”storyline! While not exactly the kind of adventure you’d expect Nick Fury to get tangled up in, the story Lee, Kirby and Purcell worked beautifully together on offered a mighty Marvel espionage melee that must be seen!

Get a brief rundown of some of the group's most influential members.