Kirby 100: The Invasion of the Lava Men

By now, just about everyone knows what happened in AVENGERS #4 by Stan Lee and Jack Kirby: After Namor threw something of a tantrum, he accidentally dislodged an iceberg holding World War II hero Captain America. While flying home from their own battle with the Sub-Mariner as well as Hulk in the previous issue, the Avengers spotted this odd shape, saw a man inside, and were shocked to find who thawed out on their ship.

At the end of that installment, Cap noted the similarities between Rick Jones and his now-deceased—or so he thought—partner Bucky Barnes and also officially became an Avenger! His first official outing among Earth’s Mightiest Heroes actually took place in yesterday’s Kirby 100 spotlight, which saw both the Avengers and Fantastic Four taking on the Hulk. Returning to their tossed headquarters in AVENGERS #5, the team cleaned the place up and then went their separate ways.

Of course, the world has a tendency to bear witness to problems springing up that need the attention of our heroes! In this case, a Transistorized Artillery Computer at a Stark factory blew up because of high-pitched sonics. Individually, the other Avengers also experienced strange sounds that caused other kinds of problems. We soon learned that the Lava Men caused the disturbance, emitted by their Living Stone weapon. One of their number had fought Thor in the pages of JOURNEY INTO MYSTERY #97 and suggested against causing trouble with the surface dwellers. The rulers moved ahead anyway. 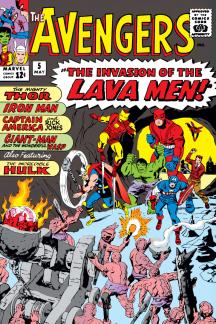 After a tussle with Iron Man, the Lava Men explained to Thor that the Living Stone exploded on impact. It had grown to such a great size, that they planned on sending it to the surface, smashing it, exploding it, and taking all the crust dwellers with it! Back up top, the Avengers did their best to keep their foes from flowing out onto the surface before heading down under themselves and joining back up with Thor. The reunion proved short-lived as the Lava Men’s witch doctor used his own magic to turn the Thunder God back to Donald Blake. Making matters worse, Hulk showed up to cause his own brand of trouble!

Luckily, Hulk’s presence gave Captain America an idea for a plan. The remaining Avengers all worked together to get the Jade Giant up on top of the Living Stone bubble and Wasp got him to punch at exactly the right spot. The resulting implosion sent the force downward instead of outward. With the threat gone, Blake turned back into Thor and sealed the Lava Men back inside the Earth, warning them not to return. Not far away, Betty Ross found Bruce Banner and took him back to the military base he worked at nearby and the Avengers went off to answer a Condition Red emergency from the Teen Brigade!

Clearly, Lee and Kirby liked the idea of building their shared universe of titles at this time. In addition to the title team, which now featured a legacy character, they also brought back the Lava Men from the earlier Thor story. Though published not even a year apart from each other, it’s fun to look at both tales and see how much the already amazing Kirby got even better as an artist!