The Fantastic Four investigates an empty house with startling results!

New parents have a lot on their mind. From diaper changings and feedings to worrying about all manner of other potential dangers, making mistakes comes with the territory. Now, take all of that and throw in a never-ending train of super-menaces to deal with and you get an idea of where Reed and Sue Richards’ heads resided in FANTASTIC FOUR #88–89 by Stan Lee and Jack Kirby.

Their son—not yet named in these issues, but eventually called Franklin—had been born not long prior in the pages of FANTASTIC FOUR ANNUAL #6, so after coming home from a mission, they all decided to look at an out-of-the-way home that would offer them privacy and safety. The fact that they didn’t think anything of a strange building in the middle of nowhere that no one had ever lived in and seemed to come out of nowhere should have triggered a few alarms, but let’s blame that new parent baby brain on that.

For us, though, we get to see “The King” do his thing, designing a domicile that would make Frank Lloyd Wright’s places look tame in comparison. The more the Fantastic Four and Crystal—a member of the squad at that point—looked around, the more they realized that something might be up. Still, they decided to buy the place and start moving in. They started regretting the purchase a bit when Reed tried drilling some holes so Sue could hang pictures and the security system shot stub bolts and trapped him in a clear jar. Still, not fully wary of the purchase, they continued to unpack. 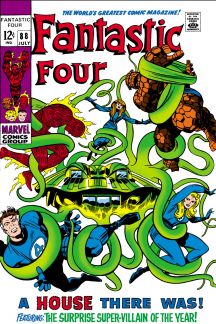 Unbeknownst to the new tenants, the build actually came from a surprise source, one who kept an eye on things while the Richards’ moved in: Mole Man! He’d been using the place to send out a signal that would make everyone on the surface world as blind as him! After robbing the FF of their sight and revealing himself at the end of #88, Mole Man really pressed his advantage in the following issue. Far more used to fighting in the dark than his opponents, the villain easily dodged their attacks!

However, Mole Man underestimated how much Reed and Sue loved each other and how fiercely they’d fight any foe to keep the other safe. After Mr. Fantastic wound up on the wrong end of the villain’s staff, The Invisible Girl lashed out, knocking off his glasses and exposing his overly sensitive eyes to light they could not handle. Enraged at the attacks on his friend and his sister and with sight renewed, Human Torch took off and melted Mole Man’s staff. As the subterranean tyrant blamed everyone but himself for his crimes, Johnny Storm corralled him and then, essentially, told him to stop being so whiny and take responsibility for himself.

With the immediate threat out of the way, the team could concentrate on reviving Reed, who seemed out for the count, but soon regained consciousness after The Thing administered mouth to mouth and CPR. In this story Lee and Kirby presented a thrilling tale that keeps you involved at every turn while also giving Jack plenty of room to play when it came to designing a house that just about any fan would love to visit—though maybe without the booby traps!