Jack draws the true heroes of the House of Ideas into adventure!

We all know the basic plot of how the Fantastic Four came into being: a quartet of people went up into space, flew through some cosmic rays, and came back to Earth with incredible powers. We know the group as Reed Richards, Sue and Johnny Storm, and Ben Grimm—but what if the transformations hit Marvel stalwarts Stan Lee, Flo Steinberg, Sol Brodsky and Jack Kirby?! In 1978’s WHAT IF? #11—written, drawn, and edited by Kirby—that’s the group that “The King” gave fantastic powers to in “What if the Fantastic Four were the original Marvel Bullpen?” In this alternate reality, Marvel’s then-Editor, Secretary, Vice President, and most storied artist would leave their comic-creating jobs to fight evil as the FF!

As we learn about how these familiar names became heroes, we also get to see them taking on a large purple monster-man who turned out to be Doctor Morrow, the man they’d left on a mission to meet. Before long, they entered Morrow’s laboratory—which came jam-packed with one-of-a-kind Kirby tech—and, after hours of searching, finally found the box they’d been looking for. We see a flashback to the early 60s when Stan informed Jack that some scientists planned on basing their next experiment on their comics. After Sol and Flo enter the room, they open a box that shoots them all with cosmic rays turning them into the famous team!

Readers saw the birth of The Thing, Invisible Woman, Mr. Fantastic and Human Torch in a very different environment: Stan Lee’s office! Upon realizing that the device had been sent by a group called The “S” People, the crew got to work tracking them down when not making comics. As we came to understand, characters like Sub-Mariner wound up with counterparts in this alternate reality as well. In fact, the FF tussled with Namor as he’d come across one of the boxes himself. After convincing him they had nothing to do with its creation, Namor promised to help find the source of this power. As it turned out, the infiltrators stood right in their midst—and the “S” People turned out to be Skrulls! 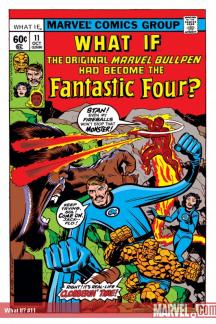 This Fantastic Four and Sub-Mariner then teamed up to give chase to the invaders, ripping apart his ship in the process. The coalition also destroyed the other boxes the Skrull intended to use on Earthlings. They then carried on in their efforts to both entertain humanity and also keep it safe!

Many people have wondered how much of himself Kirby put into characters like Ben Grimm, so it’s really interesting to see him do that literally. The Kirby-fied Thing looks a bit different, but they sound the same, for the most part. Kirby also wound up being the one who didn’t quite trust the mystery box and also destroyed the one that changed them with his shoe!

The Watcher stepped in to explain that the comic book counterparts took on some of the characteristics of their creators, like, “Sue Storm was a fit projection of Flo Steinberg’s courageous dedication to a venture filled with countless dangers.” In other words, this issue offers a unique look at some of the dynamics at work during Kirby’s days at Marvel.