Jack Kirby’s work on CAPTAIN AMERICA began with his co-creation of the character, alongside Joe Simon, in 1941. The King continued across eras with the Sentinel of Liberty, finally wrapping up more than three decades later in 1977. And as his time as the writer, editor, and artist on the series came to a close, he decided to bring a new character into the mix: The Night Flyer.

Kirby started issue #213 with a characteristic bang as readers witnessed Steve Rogers back in all his star-spangled glory, fighting Nazis and the Red Skull. This, however, turned out to be a nightmare occurring inside Cap’s head; prior to this issue, he’d been temporarily blinded during a battle with the Skull, leaving him to recover in a S.H.I.E.L.D. hospital bed. 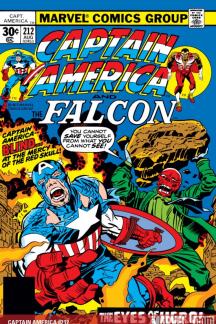 The planned rest and recovery proved to be difficult for Rogers, as the patient in the bed next to him—known only as The Defector—kept attracting assassins! Steve, still unable to see, took out the first of these attackers with relative ease, but had no idea that The Corporation intended on sending more to finish the job.

The mysterious organization’s Kligger and Veda decided to bring in an operative known as The Night Flyer—a man described as “a cultist…a mystic…a ritualist, dedicated to the art of killing.” Readers got a peek at his strange perfectionist tendencies before The Night Flyer headed for the hospital, ready to put an end to his mark. 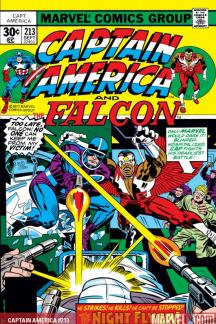 The villain expertly made his way past not only a visiting Falcon, but also some of S.H.I.E.L.D.’s finest sharpshooters. After briefly getting captured, The Night Flyer managed to escape after blowing up a roomful of agents. Intent on finishing the job, he made his way through the facility before Sam Wilson caught up with the killer, though the Flyer bested him again.

Unwilling to sit the fight out, a hazy-eyed Captain America donned his red, white, and blue gear, leaping into the fray. He caught up with the Night Flyer’s contact inside the hospital before coming face to face with the assassin himself. The Flyer responded to Cap by utilizing a flamethrower—but Rogers held his own long enough for S.H.I.E.L.D. to spot the Flyer’s glider and blast it out of the sky. 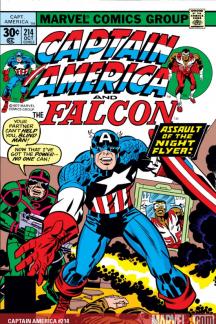 As The Night Flyer tumbled to the ground, Captain America emerged, steadfast, victorious yet again—a fond farewell to the Sentinel of Liberty from his creator, Jack Kirby.

Stay tuned to Marvel.com for more on Jack Kirby and join the conversation on all of our social channels with the hashtag #Kirby100!