Captain America and The Falcon take a wild ride to different dimension!

In the 1960s, Jack Kirby worked with Stan Lee to start building up the Marvel Universe. Many fans rightfully think of that era as truly magical, a fount of creative energy focused on the task of making heroes and villains that would stand the test of time. But it’s also important to look at the 70s work of “The King,” when he wrote, drew and edited a batch of books that included DEVIL DINOSAUR, MACHINE MAN, and BLACK PANTHER as well as his return to the character and title he launched, CAPTAIN AMERICA.

Kirby kicked his latter day run on Cap’s book with an epic story called “Madbomb,” a tale filled with many of the hallmarks of his work from the krackle to the positive social message. Seemingly hard to top, he tried with the story starting in CAPTAIN AMERICA #201, which pits Steve Rogers and his partner Falcon against a mysterious group called the Night People of Zero Street!

The Night People not only wanted to recruit Cap as their own hero, but also launched a crime wave that hit everything from grocers and jewelers to pet and costume stores! They even swiped projectors from late night movie houses! After talking to one of the Madbomb makers, Steve Rogers and Sam Wilson thought they’d have a chance to relax, but then heard about the mysterious new group from Sam’s girlfriend Leila right before those very same denizens of Zero Street kidnapped her in an effort to bring Falcon and Cap to them! 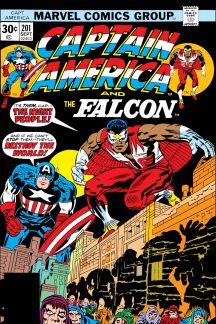 Falcon flew off in a hurry, but accidentally hit an oncoming plane flown by Texas Jack Mudloon, a wealthy adventurer. After thanking Jack, Falcon flew off again, this time right into the portal to Zero Street! On the other side, the Night People grabbed him, put Falcon and Leila on trial, and then gave them shock treatment.

Back on Earth, Captain America heard about Falcon vanishing and got to work finding him in issue #202 which led the Star-Spangled Avenger to also meet Muldoon. While they figured out how to find Wilson, Sam himself—now brainwashed—moved to fight a huge, craggy, fire-breathing monster on behalf of the Night People. At the same time, Cap waited for another portal to Zero Street to open up so he could leap into action. Unbeknownst to him, Texas Jack followed him through as well!

In #203, Cap and Jack learned that an Earthly asylum had been transported to another dimension years ago, creating Zero Street and the Night People by extension. More surprises came when Rogers ran into Leila and Falcon, neither of whom recognized him! The local leaders offered the new arrivals the choice of either death or a change like the one Sam and Leila went through. While they thought on that, a small army of monsters like the one Falcon previously fought attacked. Cap got the information and equipment he needed and used a portal to Earth to get everyone to safety before blowing the machinery up, leaving Zero Street to the invaders.

As he tended to do when left to his own devices, Kirby not only offered up a super-fun super hero story with cowboys and monsters and alternate dimensions, but also social commentary on African Americans’ treatment in the justice system and also the status of those who had been institutionalized.