Kirby 100: The Origin of Professor X

When first we met Professor Charles Xavier, he already exhibited immense power and lead a group of young mutants intent on protecting a world that hated and feared them. But, where did he come from? Writer Stan Lee, layout artist Jack Kirby and finisher Alex Toth answered that very question in 1965’s X-MEN #12.

Before getting any biographical info, though, the X-Men rushed to their teacher’s office after hearing an ear-splitting whine from Cerebro. Professor X warned them of an impending threat and sent them out to perform various tasks to protect against the incoming invader.

After building ice walls, booby trapped trenches and logs filled with grenades the teens returned to Xavier only to discover that his brother posed the impending threat! He then explained further remembering an atomic explosion in Alamagordo, New Mexico that claimed his father’s life. In stepped Brian Xavier’s colleague Dr. Kurt Marko to watch over Charles and his mother.

Though Charles never trusted the man, his mother did and Marko soon became his stepfather. Soon, they both realized that Marko only wanted Mrs. Xavier for her money! Just then, the household got far worse when Marko’s son Cain showed up and proved a real jerk. 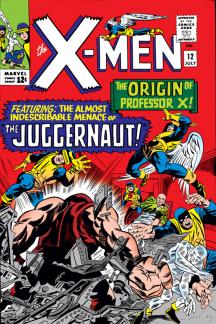 Just when Xavier came close to explaining how a teen bully became powerful enough to garner all of these defenses, the ice wall came crashing down, nearly followed by the mansion as well!

Realizing that Cain planned to toy with him and his students, Xavier continued his verbal memoir, picking up with the death of his mother. Cain’s hotheadedness, and an ignorance of chemical reactions, lead to Dr. Marko’s death and also a relationship that would remained strained and complicated for the foreseeable future between stepbrothers.

As young Charles’ mutant mind powers developed, he realized that competing against humans proved too easy. Still, Cain grew more and more jealous of his stepbrother’s achievements to the point where he even tried to drive Charles off a cliff!

Later, when they both served during the Korean War, Cain ducked into a cave and discovered the Lost Temple of Cyttorak and its fabled ruby which transformed the greedy, jealous man into the unstoppable Juggernaut!

The actual battle took place in the following issue by Lee, Kirby and finisher Werner Roth who was going by Jay Gavin then. The kids put up a gallant fight against the one man wrecking crew and even got some help from the Human Torch to finally put Juggernaut out of commission to return another day.

While X-MEN #12 might not offer full-blown Kirby interior artwork, it is fascinating to see his work combined with that of Toth, a master of the form in his own right. Both artists worked in the comic strip medium for a time, established themselves in cartoons and eventually moved on to animation.

Earn Points, Get RewardsJoin NOW!
In this article: Professor X