Jack and Stan Lee pit Captain America against The Red Skull once again!

In 1968, Stan Lee and Jack Kirby broke the Sentinel of Liberty out of TALES OF SUSPENSE and finally gave him back a solo book starting with CAPTAIN AMERICA #100. That first issue wrapped up a story that had begun in the previous book, but #101 launched the series’ first multi-part adventure, which revolved around Cap tracking down Nazis like Werner von Krimm, otherwise known as the Butcher of Lichtengarten, and punching their faces in! To the shield slinger’s shock, Nick Fury popped up during the fracas and helped the Nazi leave the scene. The head of S.H.I.E.L.D., of course, had a plan: he’d placed a tracer on Von Klimm and sent him on his way so that they could figure out who he really worked for.

The big boss turned out to be none other than The Red Skull, who needed Von Klimm to deliver the key that would help him awaken The Fourth Sleeper. Back in TALES OF SUSPENSE #72–74, we saw that the crimson war criminal had hidden three other such machines, but hoped this one would prove more successful than the previous trio.

After explaining how he escaped his apparent death in the pages of TALES OF SUSPENSE #91, Red Skull had to wait for Von Klimm to arrive. He didn’t realize that Cap followed the villain in an experimental flying saucer provided by Fury. Soon shot down, the Avenger jumped right into action, but the Skull’s agents got the drop on him. 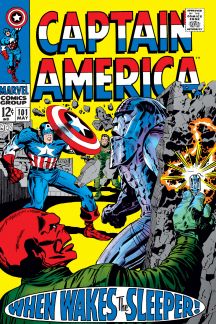 Red Skull held the Soni-Crystal, which responded to his mind, as the guards brought their captive into the stronghold. Chaos erupted as The Fourth Sleeper awoke and immediately displayed its ability to control its own density. Cap took advantage to escape his immediate captors and then learned from the Skull that this Sleeper had the added ability to explode, potentially taking the world with it! As the first issue ended, the Sleeper exhibited its massive power by first blowing up the Skull’s secret base and then sending explosions up the coast. Though it seemed like he couldn’t have possibly survived, Rogers came out with both his life and the key!

In CAPTAIN AMERICA #102, our hero reunited with Nick Fury and got outfitted to take on the Sleeper. In addition to taking out a gang of assassins who tried ambushing him right after he left his S.H.I.E.L.D. briefing, Cap also reunited with Agent Carter who now found herself tasked with helping him on his mission. Meanwhile, Red Skull revealed that he also had an army of followers called Exiles who had been training on an island since the end of World War II. He used these agents to try and stop Cap and Agent 13 from halting the engine of destruction, but the duo bested them.

Finally, as The Fourth Sleeper appeared out of nowhere thanks to its atomic control of itself, Cap handed the key to Carter and threw himself in the robotic creature’s path. Carter’s intense feelings for Rogers filtered through the key and wound up completely dissipating it! Ultimately, this story filled with classic Kirby and Lee storytelling and visuals ended on a positive note thanks to their belief that love could conquer mindless evil, even the kind that threatened the very existence of the planet!