Kirby 100: The Sorcerer and Pandora’s Box

The King and company unleash a bevy of monsters on The Human Torch!

Back in 1963, Johnny Storm felt like he just couldn’t catch a break. In STRANGE TALES #109 by Stan Lee, Robert Bernstein, and of course, Jack Kirby, the young man found himself with a day off from school and nothing to do! Even his pals in the Fantastic Four wouldn’t let him in on their upcoming mission because they scheduled it for the next day when he’d be back in class!

Looking for some action, he flew off. In quick succession, he stopped a building from burning down and saved a train from a flooded section of tracks. So, Johnny felt pretty good when he came across a weird sorcerer chasing kids off his property with a pack of leashed dogs. Torch used his powers to encircle the beasts in flame leashes to save the kids. The mage demanded privacy and for the local kids to stay off of his property, which our hot-headed hero took issue with. Storm continued making the situation worse before finally flying the kids away. Though that encounter might have come to an end, it would not be the last the youngster heard of the local mystic.

Back inside the sorcerer’s mansion, he recounted the origins of Pandora’s Box. In Ancient Greece, a woman named Pandora opened a forbidden box and unleashed evil upon the world. He continued by explaining that Circe came down to return those evils to the box which he now possessed. The spell caster only needed to find the magic words to unleash the power within. Two weeks later, he appeared at the Glenville National Bank and demanded all of the money. As the guards moved to expel him, the magician unleashed the monster of Hatred on them, causing everyone there to turn against one another. While the crowd, the criminal waltzed right in and snatched all the money he could carry. Upon leaving he regained Hatred and then released Forgetfulness to cover his tracks. 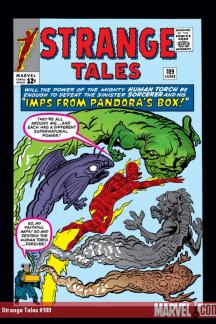 The sorcerer continued his spree utilizing the likes of Sleepiness, Paralysis, and Cold to steal jewels, paintings and fur coats! Eventually, the Torch realized that all of these supernaturally tinged crimes shared his recent acquaintance and zoomed to the mansion where he found the villain examining his ill-gotten gains. In the ensuing battled, Human Torch fended off Disease with an intense heat blast, but got doused by Flood leaving him momentarily powerless. Storm thought the arrival of police officers would help the situation, but the sorcerer released both Foolishness and Laziness to hinder their efforts.

Johnny then had to rely on his wit to save his skin. He tricked his opponent into allowing him to choose Fire as his means of death. However, he’d dried off to the point where he could flame back on and absorbed the imp before snatching the box out of the bad guy’s hands. Not only did this issue give the teenage Human Torch something to do with his non-school hours, but also “The King” an excuse to draw a whole bunch of out-there monsters!