Kirby 100: The Strength of The Sub-Mariner

The King concludes his unparalleled run with the Fantastic Four!

As Kirby 100 winds down to its final few weeks, we’re going to focus in on the King’s last issues and arcs on some of the books he became most well known for. Today, we spotlight FANTASTIC FOUR #102 from 1970 by Jack and Stan Lee which marked the end of an incredible run on the book by these two titans. Few would expect Kirby’s last FF adventure to begin with Johnny Storm and Crystal trying to nurse Ben Grimm back to health as the flu threatened to take out the team. However, they had much greater problems brewing once again with Namor at the center.

While sailing around in an Atlantean Naval patrol ship, The Sub-Mariner spotted a man unconscious on an island overrun by dinosaur-like creatures. The sea king jumped into the fray, beat away the flying attackers and decided to bring this stranger back to the land of the living, not realizing he now had none other than Magneto in tow!

Not long after, The Thing thought he might be losing his mind as he witnessed nearby buildings flying to pieces. As it happened, Magneto had woken up and started messing around with some of Namor’s equipment, allowing him to project his powers all the way to New York City. Back in Atlantis, the Master of Magnetism got the grand tour of his host’s palace, which Kirby took obvious delight in designing. The two human haters then discussed their shared disdain for those who walked the surface world and decided to team up. 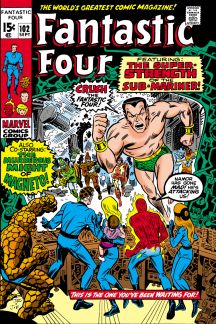 In NYC, Mr. Fantastic explained to the rest of the team that he found the signal behind the disturbances coming from Atlantis. He also said that he had a weapon that could retaliate with a concussion missile that would act as a kind of warning shot. They didn’t intend to use the device, but after Magneto attacked them directly in their home, Grimm jammed the button and shot it off. Knowing what caused the rumblings in Atlantis, the mutant menace decided not to explain this to his host and continued pushing his new partner into declaring war on humanity. Namor moved forward with his retaliation, even agreeing to let Magneto tag along.

This story would continue for the next two issues, but without Jack Kirby. He left Marvel in 1970 and moved over to the Distinguished Competition for a few years before returning later in the decade. For more on the very last issue of FANTASTIC FOUR with new Kirby artwork, come on back for the very last installment of Kirby 100!

In this article: Magneto (Max Eisenhardt)

‘Devil’s Reign’ begins, the ‘Trial of Magneto’ wraps, and Avengers of the Multiverse assemble in ‘Avengers Forever’!