The Simon-Kirby team produces one of the Golden Age’s great heroes!

These days, everyone knows The Vision as Marvel’s number one synthezoid hero with more than a few family issues to work through. However, before the Android Avenger, another Vision walked the halls at the House of Ideas.

A few months before creating Captain America, Joe Simon and Jack Kirby teamed up to present the very first appearance of The Vision in 1940’s MARVEL MYSTERY COMICS #13. This series debuted Golden Age heroes like Namor and the original versions of Angel, The Human Torch, and Ka-Zar.

The story kicked off with Dr. Enoch Mason showing three of his friends a new machine called The Dimension Smasher. As he put it, “The purpose of my demonstration, tonight, is to prove that the so-called ghosts and spirits are actually inhabitants of worlds and universes whose dimensional spheres are co-existent with our own.” Unfortunately for him, an intelligence-hating mobster by the name of Brain had bought Mason’s promissory note and intended to either collect or take his equipment that very same night. 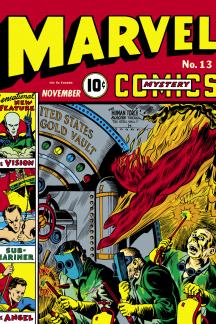 The hoods busted into the laboratory in the middle of the experiment, telling the doc that he either had to pay up right then or get an impromptu renovation. As he floundered for an answer, the green-headed Vision appeared behind one of the gunmen in a cloud of smoke sparked by his own cigar. The visitor froze the mobster, introduced himself as Aarkus, Destroyer of Evil, and then took off after Brain’s other thug. After taking care of business, Aarkus returned to Mason, this time in a more human form.

Aarkus remained in that form when Brain’s mob showed up for further revenge. Knocked unconscious for a time, the otherworlder asked for one last cigarette before death and used the ensuing smoke to unleash his more powerful side. The Vision made short work of the crooks and even used their pants to tie them up!

While Vision clearly didn’t become Simon and Kirby’s main contribution to the Timely era, it’s interesting to note the similarities between his origin and Captain America’s. Both came about thanks to an experiment interrupted by bad men with guns.

In this article: Vision, Jack Kirby