Revisit the King’s creation of the Avengers founding member!

During the 1960s, female comic book characters weren’t often positioned as heroes the same way that their male counterparts were—many were relegated to roles as romantic interests, damsels in distress, or both. While Janet van Dyne has filled these roles at times, she also holds the unique distinction of being not just the first female member of the Avengers, but also one of the team’s five founding heroes. Not bad for a character that only debuted a few months before the group’s inception!

Created by Stan Lee and Jack Kirby, Janet made her original appearance in June 1963 with TALES TO ASTONISH #44. The story saw Hank Pym (A.K.A. Ant-Man) first meet van Dyne when her father Vernon appealed for help with a science experiment. While Pym dismissed Vernon’s request, he did take a liking to Janet—who seemed to have a mutual interest in Hank.

Later that night, Vernon van Dyne’s experiment accidentally transported a space creature called Kosmos directly into his laboratory. After witnessing her father get knocked unconscious by the beast, Janet called Pym for help—but by the time he arrived as Ant-Man, Vernon had already died from the attack.

The two worked together in the aftermath of the accident—and Hank gave Janet shrinking powers of her own, as well as with the ability to sprout wings and fly. In an effort to avenge her father’s death, van Dyne took on the mantle of The Wasp. 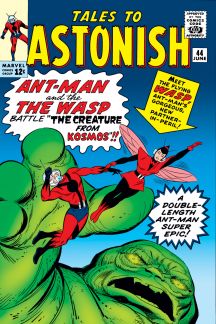 Now using their super hero monikers, the duo ended Kosmos’ reign of terror and fought other threats across the globe. Before long, Ant-Man and The Wasp joined Thor, Iron Man, and The Hulk to become Earth’s mightiest heroes with AVENGERS #1 in 1963.

Janet van Dyne immediately made herself known as a force to be reckoned with—even among such powerful and cosmic company. In issue #1, The Wasp demanded that Ant-Man wait for her to respond to Rick Jones and the Teen Brigade’s radio request for help—and when Hank made a crack about Janet’s makeup, she called him a “stuffy old bachelor” and answered the call.

Later in the same issue, as Ant-Man and The Wasp faced off against a rampaging Hulk, Janet risked her life to lure the Jade Giant into a trap. After fighting The Hulk—and dropping Loki into a lead-lined tank—Ant-Man, The Wasp, Iron Man, Thor, and a now-recovered Hulk convened to make their association official. Janet came up with a team name and the Avengers were born.

Earth’s mightiest heroes have become one of the most influential groups in Marvel history—and The Wasp has served as the team’s leader more than anyone, except Captain America, ever since. One of Jack Kirby’s finest creations, Janet van Dyne has proved that a female hero can be as interesting, complex, capable—and fallible—as any of her male counterparts for more than 50 years.