Nick Fury faces double the trouble with Mentallo and The Fixer!

Over the years, Jack Kirby developed quite the deserved reputation as one of the best tech-artists in comics. His inventions might not actually translate well into the real world, but they sure looked amazing on the page with all of those gears, nozzles, tubes and other details. Kirby and Stan Lee would come up with plenty of books and characters that took advantage of this talent. S.H.I.E.L.D.’s penchant for gadgets and strange villains did exactly that, especially in the story that introduced Mentallo and The Fixer back in 1966.

The tale began most in STRANGE TALES #141 and ran three issues through #142 before wrapping with #143. Nick Fury and company had finished taking out a Hydra faction; upon returning to base, the fearless leader of S.H.I.E.L.D. found himself under attack from his own people! Instead of a mutiny, though, the super spy discovered that his E.S.P. Division had been working on a device that could project thoughts. This set off a mental alarm for a man known as Mentallo, a former S.H.I.E.L.D. agent who had incredible mind powers himself. He intended to take over the organization with his abilities, but failed.

To continue down that road, though, Mentallo decided to look for help. He used his powers to watch from a safe distance as The Fixer used a bed frame, a stool, a sheet, and plenty of stolen parts to break out of prison. Not long after the convict’s escape, the telepathic rogue used his mind-reading abilities to break into the former’s undersea base. Fury and S.H.I.E.L.D. actually witnessed this for themselves thanks to another development from the E.S.P. folks. However, since they couldn’t nail down the location, they simply knew they’d have a problem with these two in the not too distant future. 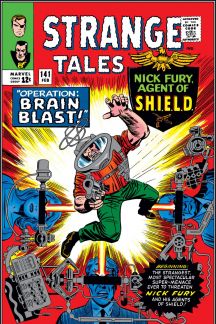 Mentallo and Fixer fulfilled that prediction as they drove the Thru-The-Ground Tank on their way towards S.H.I.E.L.D. HQ. However, Fury and company had plenty of their own tricks to at least slow down their new enemies, like super-thick walls, moving barriers and plenty of stun-cannons. However, none of that truly worked against the villainous duo, who figured out ways through all of those defenses! The bad guys even maneuvered their way against Nick’s squad so that they avoided attack and also paralyzed them with Neutrino Shells. Even worse? They used an Electronic Helmet to take control of Fury’s body!

While the new leaders of S.H.I.E.L.D. figured out how to keep the power they’d stolen, Tony Stark worked with the rest of the organization to overthrow them. At the same time, Fixer and Mentallo attached Fury to an H-Bomb built with help from Them—later identified as A.I.M.—before taking the mask off. With his mind his own once again, Nick sent out a signal to the E.S.P. division who then alerted the rest of S.H.I.E.L.D. to take action. A pair of agents wearing Scrambler Helmets snuck up on Mentallo and Fixer, and blasted them with pure hate waves. With the room stunned by the attack—including Fury—Stark had enough time to get the Neuturalizer in place to disengage the atomic bomb.

As their main distraction disintegrated on the table, Fixer and Mentallo began fighting with one another and soon made a break for it, though S.H.I.E.L.D. agents anticipated their moves and captured the troublemakers!