The King puts his stamp on another standard of Marvel’s Golden Age!

Timely Comics knew how to put an anthology comic together that would attract plenty of eyeballs. They’d done it before with MARVEL COMICS and many of their other titles and continued the trend with 1941’s patriotically themed USA COMICS. Of course, it helped that Timely hired a pair of comic-making juggernauts—and CAPTAIN AMERICA COMICS #1 creators—by the names of Joe Simon and Jack Kirby to get the book out. While they didn’t take on the entire periodical like they did with Cap’s debut, but they certainly put their stamp on it!

Simon not only edited the book, but also inked the cover as well as the intro page and a splash page for a story called “Rockman: Underground Secret Agent and the Tunnel That Lead to Death.” Kirby’s role in this particular issue also revolved around penciling the cover as well as the aforementioned introduction on the first page and that splash page in the Rockman story, which writer-artist Basil Wolverton drew the rest of.

“The King” may have also had something to do with “The Hideous Dame Kackle.” No one’s quite sure because the story’s credited to Charles Nicholas, which happened to be a house alias as well as a real artist’s name, making it all the more confusing. Anyway, while his contributions to this specific issue might not seem all that huge, think about this: Kirby drew the first images of new characters like The Defender and Rockman that readers ever saw between the cover and splash page. 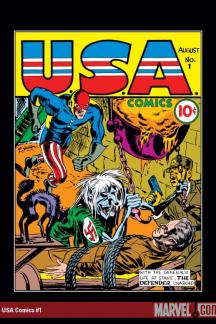 After that initial offering, USA COMICS readers wouldn’t see Kirby’s work in the book until issue #5 in 1942 when he seemed to ink many of the stories under the alias of Charles Nicholas. He also penciled the “Hills of Horror” story under the same pen name. He would do similar work on the sixth installment as well. Also of interest: by that point, Simon no longer edited the title, but a young guy by the name of Stan Lee did! It wouldn’t be the first time they worked together, but one more step to them becoming the architects of the Marvel Universe during the Silver Age!

Marvel Halloween Costumes and Accessories for a Frightfully Good Time