Mike Allred makes the discovery of the Eternals for the first time!

A few days back, SILVER SURFER artist Mike Allred remembered how a childhood accident lead to his first exposure to Jack Kirby’s amazing creations. As time went on, he continued absorbing as much of the King’s work as possible and continues to cycle back through his comics even now.

Right now, he’s re-reading Kirby’s 1976-debuting series ETERNALS. One of Jack’s late-70s return to Marvel projects, this one introduced the world to another race of super-powered beings, this one created by the Celestials to fight against their enemies, the Deviants. Like many of Kirby’s other books from that time, ETERNALS felt like pure creativity on the page, partially because he wrote, edited, and drew the comic himself.

“So wild,” Allred recalls of his first exposure to ETERNALS. “It was the mid-to-late-80s when [I was] in Colorado Springs where [I] discovered several comic book stores there and Denver. I crash coursed spending all my disposable income and trading sculptures, my main art hobby at the time, to complete my comic collections. It was around this time I discovered ETERNALS.”

As the 19 issues of the series progressed, readers learned more and more about Ikaris, Sersi, Makkari, and the others. On further readings, Allred notes that his relationship with the characters themselves remains the same, but other interactions have changed. 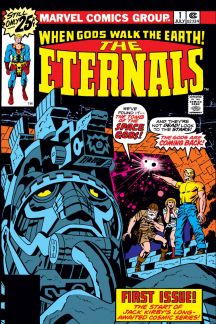 “They all have a timeless consistency for me,” Allred shares. “But I certainly relate differently to Kirby the man, Kirby the creator as I contemplate and appreciate the path he carved for those who follow in this thrilling profession.”

With ETERNALS, part of Kirby’s path involved asking big questions posed on the first page of the first issue: “Is man alone in the universe? Every myth and legend to emerge from the distant past points to a strange visitation from the stars!! Beings of great power have been on this Earth—and then departed! Who were they? What did they do here? Where have the gone?”

In other words, Kirby made this series his own at all points and that same kind of feel permeates much of Allred’s work.

“You just simply know that Jack Kirby loved being in that creative space,” Allred sums up. “You just don’t put that kind of time and effort into something unless it lights you up. It’s exciting to imagine how much fun he had making comics and telling stories. It enhances the enjoyment of absorbing everything he did.”