Look Inside That Mysterio Issue of Amazing Spider-Man

Get the lowdown on Amazing Spider-Man #311!

There's been an enormous amount of eyeballs on Mysterio over the past few days...but beware, True Believers! That's exactly when the master manipulator is likely to strike.

Inspired by the Super Villain's zip into the zeitgeist, we've decided to take a look back at 1989's AMAZING SPIDER-MAN #311 by David Micheline and Todd McFarlane.

Here's what goes down in the issue...

During an intense heatwave, Spidey finds himself facing strange challenges, even for him, as stone lions attack and buildings turn into murderous giants. Deflated by his inability to save an innocent life, Parker returns home where Mary Jane attempts to make him feel better.

After wallowing in guilt for a while, Spidey swings back to the scene of the building battle to retrieve his camera—only to discover a complete lack of rubble. Realizing only one member of his rogues' gallery had the skills to pull off all those illusions, he goes hunting... 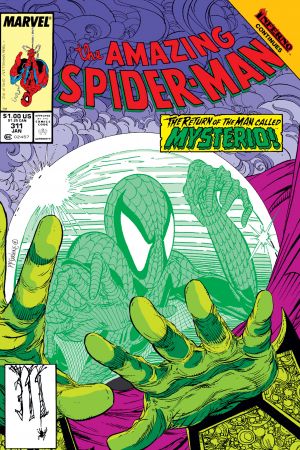 Sneaking into a warehouse-turned-sound stage, the web-slinger soon finds himself proven correct as he comes mask-to-globe with Mysterio, otherwise known as Quentin Beck. The villain then reveals that he made Spider-Man think he allowed the death of an innocent man to shake his confidence in hopes that it would lead to an easier victory for him.

After Mysterio pulls a fast one to escape, our hero gives chase only to find himself on the set of a film called "Star Fight IV: Return of the Sequel" where he faces off against a very physical alien prop. Spider-Man smashes his way into the basement in hopes of finding and destroying Mysterio's power supply. The plan works, and the overload fells the villain almost immediately.

This classic Stan Lee-John Romita Sr.-Don Heck tale stretched the Mysterio mystery into issue #67, and featured the web-head looking for his camera in the wake of a fight and led to a battle between the hero and villain. During the fight, Mysterio made Spider-Man think he'd been shrunk to six inches tall, and stalked through a model of an amusement park! 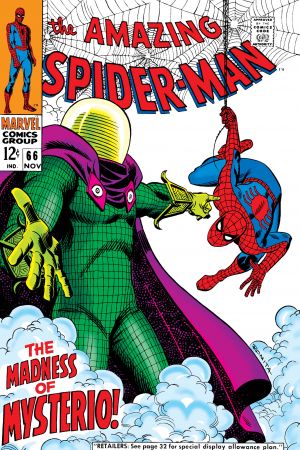 After realizing that Mysterio had actually jumped into a huge robot version of himself, Spidey evened the playing field and defeated the baddie once again!