This November, Marvel celebrates Indigenous history with a landmark special, MARVEL’S VOICES: INDIGENOUS VOICES #1, written and drawn by some of the industry’s most renowned Indigenous talent along with talents making their Marvel Comics debut! Celebrated writer and artist Jeffrey Veregge, who just wrapped up his exhibition Jeffrey Veregge: Of Gods and Heroes at the Smithsonian’s National Museum of the American Indian, is leading this book alongside a team of acclaimed creators to explore the legacy and experiences of Marvel’s incredible cast of Indigenous characters.

Hugo, Nebula, and Locus-award winning Black/Ohkay Owingeh writer Rebecca Roanhorse and Tongva artist Weshoyot Alvitre tell an Echo tale like none before as she is set to play a critical role in Marvel Comics. Geoscientist and Lipan Apache writer Darcie Little Badger joins acclaimed Whitefish Lake First Nation artist Kyle Charles for a Dani Moonstar story where she will face the crucial question of what her Indigenous heritage means in the new era of mutantkind. And Bram Stoker-winning horror writer Stephen Graham Jones of the Blackfeet Nation teams up with Qalipu Mi’kmaq First Nation artist David Cutler to revisit one of the darkest spots of X-Men history!

"C.B. [Cebulski] and I started talking about various Native projects a year ago when discussing my 'Of God's & Heroes' Marvel art exhibit at the Smithsonian. I am truly grateful for the platform that Marvel has not only provided for me and my work, but with this edition of Marvel Voices, all of Native America," Veregge said. "This is an opportunity to share the cultural influences that we as Native artists and writers grew up with that will add more depth and dimension to the Native Heroes in the Marvel Universe." 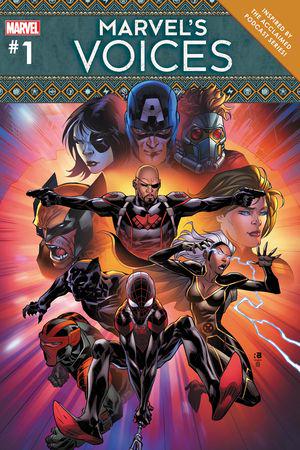 “Marvel’s Voices started in 2018, which grew and evolved from a popular Marvel podcast into a larger program within our comics,” said Editor-in-Chief C.B. Cebulski. “MARVEL'S VOICES #1, our first anthology in this program, was released this past February, and the reception from fans was incredible. It was clear we needed to do more to lift up more voices and talent and increase representation in and behind our stories. This book is the first step of our next expansion of the program to not only elevate the diverse talent we already have at Marvel, but also discover new writers and artist who can bring their voices to our characters, both old and new. And this is only the beginning."

The Marvel's Voices bi-weekly Marvel podcast features guests from all across the Marvel Universe – including talent from Marvel’s comics, live-action television shows, animation, games, and more, along with celebrity fans of Marvel from entertainment and beyond. Since its debut two years ago, host Angélique Roché has continued to hold in-depth conversations with storytellers who have been creating unforgettable stories through their unique perspectives. The series will launch its newest season later this year.

Go Inside the Action-Packed World of Natasha Romanoff in ‘Marvel's Black Widow: The Art of the Movie’