Charles Soule runs down the talented squad Poe has watching his back.

Resistance pilot Poe Dameron’s embarking on a new mission in STAR WARS: POE DAMERON #21, out November 21, and he’s going to need all the help he can get to score his ultimate target, the mysterious Lor San Tekka.

Good thing Black Squadron’s got his back.

They’ve had their ups and downs over the course of the series, even lost members, but the men, women, and droid of Black Squadron also have someone to back them up, namely writer Charles Soule. He knows the ins and outs of their strengths and weaknesses, and he’s ready to tip his hand to light them up for your illumination and edification.

Snap
“Temmin ‘Snap’ Wexley has been fighting evil in the galaxy since he was a little kid, as we saw from Chuck Wendig’s great ‘Aftermath’ trilogy of Star Wars novels, set right after ‘Return of the Jedi,’” says Soule. “He fought the Empire, and knows how important it is to prevent anything like them from rising again. So, he’s got enormous strength and resolve. He can be a little impulsive, though—he’s not always in control of his emotions—and it gets him into trouble.” 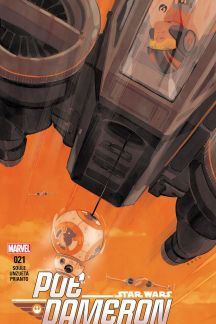 Jess
“Jessika Pava is fantastic!” raves Soule. “I love writing her. She’s a gearhead, who’s always tinkering with her ship and modifying it to make everything run more powerfully, better, faster. She talks tough and fights tougher. That also lends itself to her main weakness, though, which is that she always needs to feel like she’s in control—that stems from events in her childhood. If she doesn’t, her effectiveness goes way down, to the point where she almost collapses, psychologically.”

Karé
“Karé Kun is just one of those hyper-competent badasses you want on your side in a fight” Soule offers. “She’s been flying with Poe since before the Resistance was formed, and knows her job inside and out. However, sometimes she gets too job-focused, and forgets she isn’t just part of a machine. Black Squadron is a fighting force, but it’s also sort of a family, and she’s not always sensitive to that.”

BB-8
“BB-8 has no flaws!” insists Soule. “He is all strength, and I will hear nothing different!”

Suralinda
“Suralinda Javos is extremely smart, she can handle herself in a fight and, oh yeah, she can spit venom—literally,” Soule says. “Sura was a journalist in the New Republic, and an old friend of Poe’s who has been swayed to the cause of the Resistance by the evil she’s seen committed by the First Order. She’s got a lot of strengths, but she’s also the kind of person who will move into grey areas all the time if it thinks it will help her accomplish her goal. She’s definitely an ‘end justifies the means’ gal. That’s a slippery slope—but I love her anyway.” 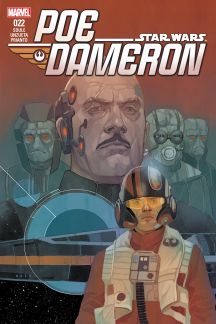