Charles Soule reflects on 25 issues alongside the best pilot in the Resistance!

The first 25 issues of POE DAMERON have seen the hotshot pilot and his Black Squadron comrades traversing the galaxy, shooting down First Order fighters, and pursuing the goals of the Resistance. And throughout the adventures, readers have gotten a closer look at a hero they were first introduced to on screen in 2015’s “Star Wars: The Force Awakens.”

Now, a quarter century of issues—and innumerable insights into his character—later, the events of Poe Dameron’s life before “The Force Awakens” are set to conclude in writer Charles Soule and artist Angel Unzueta‘s POE DAMERON #25! Out tomorrow, the story will lead directly into the unseen events of “The Force Awakens” beginning in issue #26, so get ready to learn Poe’s full backstory right here.

We spoke with Soule about his experience co-piloting POE DAMERON.

Marvel.com: Charles, as we approach the 25th issue of the series, what can you share with us about who you felt the character was when you were preparing to pen at the start and who you think he is now—two movies and twenty-five issues later?

Charles Soule: I started writing POE DAMERON #1 before I’d even seen the first movie. I’d gotten a great rundown from Lucasfilm, flew out to San Francisco with Phil Noto (the amazing artist who launched the series with me and still handles the covers) to get a bunch of visuals, the story, etc. and had an idea of who Poe was, but I hadn’t seen him talk or walk, so to speak. Fortunately, where I landed seems to have worked pretty well, and it’s only sharpened now that I’ve had plenty of opportunities to see how Oscar Isaac approaches the character on screen. He’s not too different from who I thought he was—but I suspect I’ve written more dialogue and adventures for him at this point than any Star Wars writer, including the movie folks. It’s an interesting place to be. 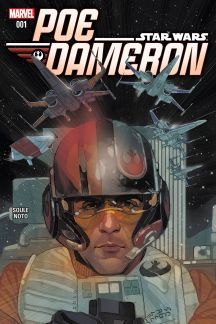 Marvel.com: “Star Wars: The Last Jedi” has also recently been released, and Poe is, of course, one of the lead characters. So far, your story has taken place before “Star Wars: The Force Awakens,” but was there anything that changed how you view Poe upon seeing him in the latest movie? Were there any new aspects of his character that might not seem obvious at first glance?

Charles Soule: I don’t want to be disingenuous here, but Poe is Poe. He evolves a bit, he learns, but he’s a person who can be taken at face value. What you see is what you get—even when he’s trying to pull off a tricky scam-type maneuver, as he did in “The Last Jedi,” he’s putting it all out there. I bet he’s a terrible poker player.

Actually, that’s a great idea for a scene. Poe losing terribly at sabacc because he just gets too excited when he gets a good hand.

Marvel.com: As you were beginning this series, were there any specific constraints placed on the story you and Phil Noto were looking to tell? How would you compare writing issue #1 to writing issue #25?

Charles Soule: There’s definitely a sense of trust that gets built up—not just with the Marvel editors, but also with Lucasfilm. When I began working on Poe, I’d only done about ten issues of Star Wars material: my LANDO limited series with Alex Maleev and the OBI-WAN & ANAKIN series with Marco Chechetto. Plus, Poe was set in the new canon time period—which still hasn’t been explored too much. So, there was a lot of outlining and pre-approvals for the series back then. It’s a bit looser now, which is partly because the time period I’m exploring has been fleshed out a bit more and is better understood on all levels, but also because at this point I’ve written 56 issues of Star Wars related stuff between POE, the other series I mentioned, and of course, the DARTH VADER series I’m doing. It earns you a little bit of trust—which is not to say I can do anything I want! It all needs to fit into the bigger picture.

Marvel.com: Looking back on your time with the Resistance’s premier pilot, what’s been your favorite moment to write?

Charles Soule: I hugely enjoyed the one-off issue #7, which was a story about Poe taking a little downtime to meet up with an old friend who has since become a series semi-regular, the space journalist and snake person Suralinda Javos. Everything about that just worked—my first time working with Angel Unzueta, who has since become the series regular artist, the introduction and design for Suralinda, the action beats, the theme…I just dug it all.

Another would be the “I’ll be luminous” moment in issue #14, written just after Carrie Fisher’s sad passing, and Oddy Muva’s sacrifice in issue #19. Lots of great moments, though—I’ve had a blast on this series.

Marvel.com: Likewise, what would you say has been the most challenging aspect of taking the helm of POE DAMERON, especially in light of the other Star Wars titles you’ve written?

Charles Soule: Well, let me say that by and large, challenges are a good thing in writing. They force you to be inventive, and inventive is always better, both from a skill development standpoint and for the readers. So, one thing I’d say here is that there are essentially no Force-wielders in the POE DAMERON series. It’s a series about a group of fighter pilots going on secret missions. Yes, it’s set against the rich tapestry of the Star Wars galaxy, but unless I’m forgetting something I don’t think there’s a single lightsaber in the whole thing. It makes me happy, honestly—writing a series that’s been able to run this long and do so well without an element some would say is essential to Star Wars storytelling—just makes me feel good. 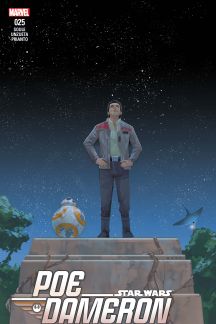 Marvel.com: You’ve been asked a lot about your love of Star Wars and which elements influenced you most, so we shouldn’t retread old ground. However, I am curious to know how you recharge your batteries. What do you do before sitting down to work on POE DAMERON? What things help get you into the mindset to take the Black Squadron to flight?

Charles Soule: At this point, it’s relatively easy for me to snap in. I will say that I think the “Star Wars: Rebels” television series, which just wrapped up its four-season run, is some great Star Wars. It gets everything right about what’s come before while also expanding the ideas inherent to the universe. Watching an episode of that always gets the gears going—but I’ve also got a number of visual dictionaries and encyclopedias I can flip through if I need to.

Marvel.com: Last question: where do you see this series going next?

Charles Soule: We’ll have to see! I will say that the issues beyond #25 should be great for fans of both “The Force Awakens” and “The Last Jedi,” and those of us (me included!) who can’t wait to see where the saga goes in “Star Wars: Episode IX.” I can’t wait to see what people have to say when those issues start to hit.

Join the finest pilot in the galaxy with POE DAMERON #25, by Charles Soule and Angel Unzueta, on March 21!