The offbeat super hero has some issues to work out behind that cooking pot on his head.

Irving Forbush presents as an adult man in just below average physical shape. He attended initial appointments in what appeared to be a pair of flannel pajamas and a “mask” consisting of a cooking pot with holes cut in it until he was redirected to dress more appropriately for therapy. He protested at first but eventually acquiesced when this writer explained that I do not see any clients with masks unless there is a medical reason why them must wear it at all times. Since then, he has dressed conventionally.

The client asserts that he is from an alternate dimension where he was employed by a company called Marble Comics by day and was a non-powered vigilante in his off hours. He has struggled to detail many of his exploits and several of the other heroes and villains he has encountered seem to be very similar in names and abilities to heroes from “our universe.” For instance, he once beat a man called the Juggernut.

Given his lack of powers and rather conventional build, this writer confesses to a level of skepticism regarding the client’s reporting. However, Forbush has been able to produce some physical evidence, including copies of Marble Comics and newspaper printings from his apparent alternate universe. Included in those clippings were information such as his parents actively disclosing to the newspapers, on multiple occasions, their disappointment in him and their wish that they had a daughter instead. He has declined to discuss his parents in much depth so these revelations, while intriguing, remain largely unexplored. 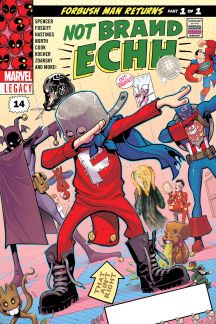 What the client is predominantly concerned with is his feelings of interdimensional displacement and the presence of memories that could not have possibly happened to him but feel so real anyway. These included meetings with Spider-Man years ago and a time working at Marvel (not Marble) Comics during which he believes he may have won an award for Best Assistant Editor. More distressing than these, however, are memories that suggest he has attacked Marvel employees, been killed, and been brought back as some kind of zombie. Despite these memories, there is no record of such an event and he appears very much alive. The only mention of him I could find from our world stemmed from a battle with the super hero team known as Nextwave, but the client insists that that was not him but rather the actual Irving Forbush of our planet. This writer has been able to discern the possible truth of this statement.

Overall, despite what could be a truly terrifying experience — waking up in world that is not your own or, at least, feels to you like another world, possessing memories that seem to not be true, including engaging in violent attacks, and literally dying — the client seems remarkably unaffected. One might even be tempted to call him goofy or silly – a humorous distraction, perhaps. 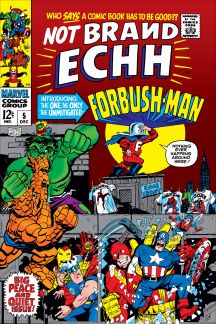 Given that Irving Forbush has sought therapy, and what he has discussed would be traumatic for anyone, this writer plans to continue seeing him. That said, the symptoms presentation is unusual enough that I have felt it necessary to consult with several other experts in various fields to ensure Forbush receives the best possible care. You can review their packet of recommendations at NOT BRAND ECCH #14, available on November 15.