Despite some intense MONSTERS UNLEASHED experiences, the Kid seems all right.

Kei Kawade is a teenage boy who appears to be of average physical health. He self-identifies as a “Inhuman” and the provided medical records reflect this report. He was recently exposed to Terrigen gas, underwent the cocooning and transformation process, and emerged with the ability to create and summon anything he draws. As his nickname/alter ego/Inhuman name “Kid Kaiju” implies, he tends to favor monsters as his drawings on choice.

The client was referred by an Else Bloodstone who the client identifies as a mentor figure. She declines to attend any sessions on her own but ensured his parents signed off on all forms, including permission to treat. While she had no relationship to this therapist or any of the staff prior to now and has openly disparaged the idea of therapy while the client was not present, she has also stated that “he is young and could use the help.”

In person, Kawade presents as a personable and enthusiastic youth. His general behavior is in line with how one would expect an outgoing boy his age would act and interact. There appeared to be nothing unusual in regards to emotional maturity or intellectual capacity.

The client denied either historical trauma or recent trauma stemming from his involvement in the so-called MONSTERS UNLEASHED incident. Follow up questions seem to reflect this as an honest response. While he has experienced stress in his life, then and now, he has proven resilient to it and there is no evidence of PTSD or Reactive Stress Disorder at this time. 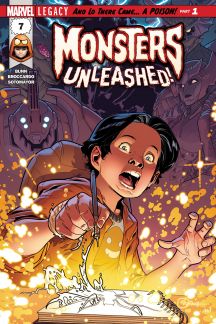 However, his mentor’s hypothesis cannot be discounted. Kawade does seem to underestimate the danger he faces through engaging in what can best be referred to as super powered activities. He recognizes some level of harm could occur to him, but thinks it is a small chance and even if something did happen, it would be the kind of harm that might make him wince but not the kind that puts him in the hospital.

Naïve or not, he demonstrates good problem solving skills. Additionally, engaging in super heroics does not seem merely to be about the rush but it flows from having a system of morality that includes wishing to help others with the abilities you possess.

In order to have a more well-rounded perspective on the client, I am referring him to Doctors Cullen Bunn and Andrea Broccardo for a battery of tests, including a comprehensive mental functioning measure and projectives. Their appointment is scheduled for October 18 and results can be found in file MONSTERS UNLEASHED #7 on that date. This writer’s expectation is that Kawade might benefit from a check-in every few months, but will require no ongoing therapy at this time.

Psy D. Candidate Tim Stevens is a Staff Therapist who would sure be making a lot of living stick figures if he had Kid Kaiju’s abilities.