New Jersey’s newest super hero takes a trip to the City to see a man about some therapy.

The client, requested an appointment under the name Laal Khanjeer — the apparent Erdu phrase for Red Dagger, the name he has been using as a costumed identity here in the States — but allowed the therapist to call him Kareem in session – no surname provided. He presented as a late adolescent to early young adult male in above average physical fitness. While he declined to name exactly where he came from, he did submit that he was a foreign national on American soil on a short-term basis.

He confessed that he did not intend to engage in costumed actions while abroad but a combination of the mystique of the New York City area and the inspiration of fellow super hero Ms. Marvel made the lure of doing so irresistible. He has found himself stunned, excited, and more than a little scared of how quickly the local media has embraced and elevated him. He also confesses a degree of guilt because he feels as though he has eclipsed Ms. Marvel despite all the good she has done and that she is “a real super hero, I’m just athletic.” He is especially worried his popularity might have something to do with her recent apparent disappearance.

In addition to his conflicted feelings about his costumed identity, he also indicated some difficulties transitioning to life overseas. While there have been no charged incidents that he indicated, just being away from home and in an environment that he has heard has been less than kind towards people that look and sound like him has him on edge. Also, he confessed, he is worried about making friends and fitting in with his new classmates for however long his time in the U.S. lasts. 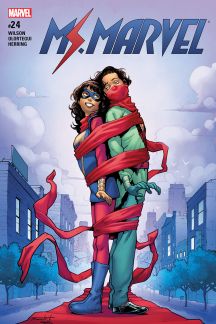 This writer validated the client’s feelings extensively and reinforced how normal and natural it was to feel unmoored during a time of transition, to worry about how others might see or view him based only on his appearance and immigrant status, and to miss his home.

I also validated his concerns regarding being treated as the new, exciting costumed crime fighter in a way that might make Ms. Marvel feel slighted while also reminding him he cannot take responsibility for how others might treat the two of them. As long as he is honest about his role in activities and tries to give her credit where she is due – both to her personally and through the press should he choose to speak to them – then he is doing right by her.

Finally, I confessed to him there were some nuances of his culture I was not familiar with and did not want to make him feel unheard or misheard because any lack of cultural competency on my part. I offered him options, pledging I would strive to study up on whatever he thought important and ask questions in the moment if I did not grasp some aspect of what he was discussing, but that I could also offer him a therapist with whom he might share more commonalities.

We hit upon a compromise wherein he would do another intake style session with Doctors G. Willow Wilson and Nico Leon on December 20 and then evaluate from there. Details of that session will be found in the file labeled MS. MARVEL #25.

Psy D. Candidate Tim Stevens is a Staff Therapist who could help stop a moving train if he wanted to, but he’s super busy this week.