Relive the Legendary 'Daredevil: The Man Without Fear'

As 'Daredevil' #1 launches this week, take a look back at Frank Miller and John Romita Jr.'s seminal story!

After just barely surviving his previous series, Matt Murdock made his return to Hell's Kitchen this week in DAREDEVIL #1!

Along with heading home comes a series of flashbacks to his early days growing up on the meanest of streets thanks to new series creative duo Chip Zdarsky and Marco Checchetto!

Those scenes looking into Matt's past show a young boy itching for justice, even if achieving it breaks the rules. At the time he sought counsel from the neighborhood priest Father Cathal. Later, after his infamous accident, Cathal talked to young Murdock about hating God because of the loss of his sight. Even later down the line, a black-clad and beat-up proto-Daredevil sat in the confessional facing another important question from his longtime adviser: do you use violence because you have to, or because you're addicted to it?

If some of these elements seem familiar, at least visually, that's because the classic '90s limited series DAREDEVIL: THE MAN WITHOUT FEAR, by Frank Miller and John Romita Jr., has served as a profound inspiration for the character ever since its release. 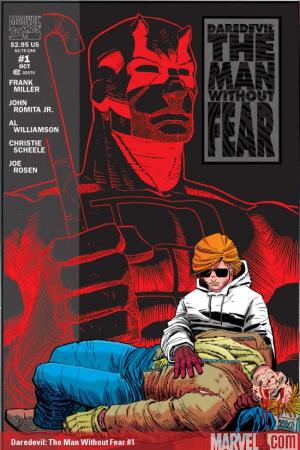 That series kicked off with a cop extolling the virtues of Matt to some of the hoodlum children in the neighborhood just before a masked juvenile skated by and stole his billy club! It then chronicled the life of a kid whose dad–a former champion boxer turned mob enforcer–constantly told him to use his brain instead of his fists.

Around that time, Matt dedicated himself to learning and following the rules, which did not make him popular with his schoolmates who relentlessly teased him, calling him "Daredevil." When not honing his mind, he also began secretly training his body in the gym his dad once trained in.

After the accident that left him blind and with incredible extra-sensory abilities, Matt struggled to utilize the gym as his soon-to-be teacher Stick evaluated from the shadows. Without pity, but filled with secret compassion, Stick trained Matt in the use of his other senses to become a warrior. 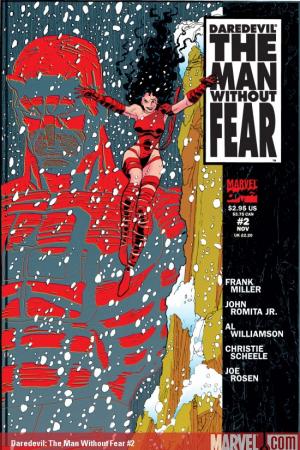 He used those skills to take vengeance on the men who killed his father and the criminal organization he worked for. Along the way he accidentally knocked a woman out a window and assumed her dead–though in reality she survived and eventually became the villain Typhoid Mary! Still, the thought of an innocent's supposed death because of his sloppy actions weighed heavily on the young man.

The next year, he attended Columbia University where he met Foggy Nelson and Elektra Natchios, two people that would stand to become among the most important in his life. While Foggy reminded Matt of the people he wanted to protect and the law he wanted to uphold, Elektra gave him an example of what someone with skills very similar to his could do if left unchecked. 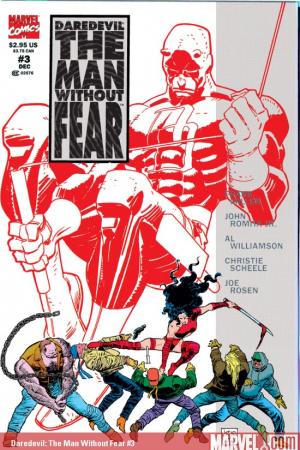 Though Matt and Elektra enjoyed each others' physicality during their stormy romance, she left him after her father had been murdered, seeking to avenge his death. Not long after, Wilson Fisk took control of New York City's criminal world, becoming the Kingpin. He then wasted no time in flooding the streets with drugs, letting loose a very nasty worm in the the Big Apple over the next few years. 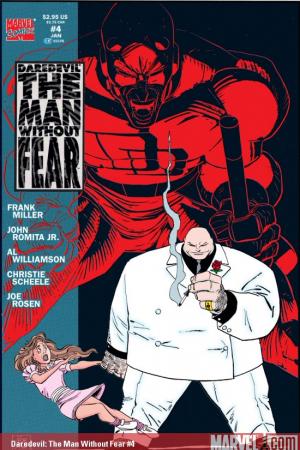 Matt finally ran into Kingpin's people when Mickey got kidnapped by junkies looking to make some money off of her. He followed their ransom attempts, but the crime lord's main fixer, named Larks, made off with her. Dressed in a black suit with a midnight bandanna tied around his eyes, Murdock responded, jumping into action against a small army of guards.

Even getting arrested didn't stop Matt from taking off after the villain when he made off with Mickey. When he finally caught up to the pair, Murdock–now calling himself Daredevil–pleased with Larks to let the girl go. When the hitman fired off a third bullet at the masked man, he deflected it with his billy club and the projectile ended up between Larks' eyes. 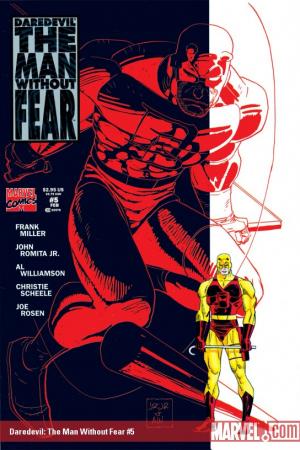 Fired from his job in Boston for not showing up and more fully understanding the threat Kingpin posed to Hell's Kitchen, Murdock decided to stay in NYC. He joined up with Nelson and began their own law firm to try and help regular people. And when the law wouldn't, a certain red-clad hero would do what he could out on the streets.

Matt Murdock may have changed a great deal since those early adventures and misadventures, but it's interesting to compare him then to the man starring in his new DAREDEVIL series. In both eras, ol' Horn Head finds himself not all the way up to physical snuff and feeling more rage than skill when taking on hoodlums. To see how that all plays out, read the brand-new DAREDEVIL #1 right now!

Read these stories on Marvel Unlimited, then visit your local comic shop to read DAREDEVIL #1 now!