Look back at the classic story as the new 'Hunted' arc begins in 'Amazing Spider-Man'!

Ready the beagles and blow those bugles because HUNTED is about to begin! This week's AMAZING SPIDER-MAN #16, by Nick Spencer and Ryan Ottley, cracks open the floodgates on the upcoming Spidey event by looking at Kraven the Hunter's deadly involvement throughout Spider-Man's life.

With that in mind, we can't talk about Kravens or hunts without looking back at the classic KRAVEN'S LAST HUNT, the 1987 crossover by J.M. DeMatteis and Mike Zeck. Running through WEB OF SPIDER-MAN #31-32, AMAZING SPIDER-MAN #293-294, and PETER PARKER, THE SPECTACULAR SPIDER-MAN #131-132, the tale put a dark spin on Sergei Kravinoff, who originally debuted way back in 1964's AMAZING SPIDER-MAN #15.

The crossover opened on Kraven raging against some of his animal trophies before ruminating on his 70-ish years on the planet and the loss of dignity and honor in the world at large. Though he'd used herbs and roots to keep himself young and fit, he knew that the end was near. But he had one more thing he wanted to do: kill Spider-Man.

To train for his impending encounter, Kraven sat in a room completely filled with spiders, grabbing handfuls of them and gnashing them between his teeth as a way to immerse himself in his prey. He also imbibed a cocktail of natural substances that he thought allowed him to become closer to his quarry.

Around this same time, the black-clad wall-crawler felt like he was cracking up after the death of Ned Leeds, so he was more than a little distracted when Kraven's first dart hit him in the neck. Even drugged and snared in a net, the Spider assumed the Hunter would simply take him elsewhere, giving him time to escape. So, when Kraven pulled a rifle at point blank range, the web-slinger panicked.

Readers were all the more surprised when it looked like Kraven shot Spidey and buried him six feet under! Kraven even mourned at the graveside wearing a copy of the black costume.

He didn't stop there, though, as he then patrolled New York City wearing the signature suit. Even Kraven seemed at odds with himself as to why he decided to do all of this. Nearly out of his mind, he seemed to come to a revelation, noting that he wanted to prove he could become a superior Spider-Man after besting him.

To do that, he brutally stopped some thugs from attacking Mary Jane Watson (who was then married to Peter Parker) and killed a man while breaking up a robbery. 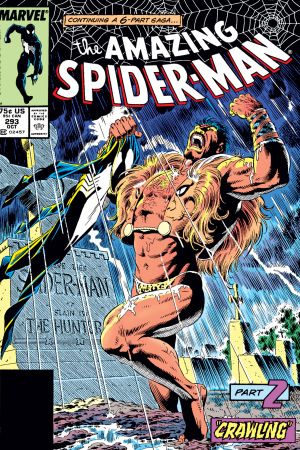 All this time, the villain called Vermin decided to leave the sewers and make his presence felt up top. His murders didn't go unnoticed by Kraven, who vowed to hunt him down. The battle that followed between the two killers went back and forth until Kraven, still dressed as Spider-Man, felled his opponent—but captured him instead of killing him.

However, back at the grave, Peter Parker had something to say about someone else taking over as Spider-Man. Focusing on his love for M.J., he crawled out of the grave and realized he'd been gone for two weeks and been replaced by a madman. He returned to his wife before rushing off to face his killer.

It didn't take long for Spider-Man to web his prey. He even got a few solid hits in on Kraven before the madman said he had no reason to fight because he'd already won by becoming an even better version of the hero. Then, after torturing Vermin some more, he unleashed the creature on the person he thought orchestrated all of his pain—Spider-Man! 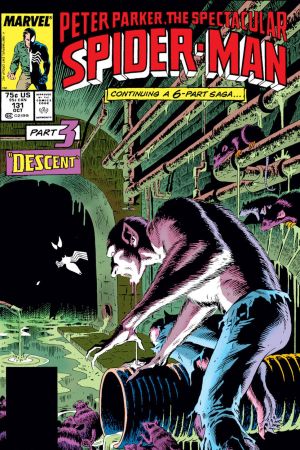 Still full of surprises, Kraven stopped Vermin before he could kill, and possibly eat, Spider-Man. He then walked the hero up to a window, told him he was free to go and vowed never to hunt again. He lived up to that promise by killing himself moments later.

By the time Spider-Man finished his battle with Vermin, Kraven's confession had already made it into the papers and his body had been laid to rest. After Spider-Man fought a reanimate Kraven in AMAZING SPIDER-MAN: SOUL OF THE HUNTER #1, Kravinoff's soul rested peacefully until his family resurrected him in the GRIM HUNT story from AMAZING SPIDER-MAN #634-637.

Read KRAVEN'S LAST HUNT on Marvel Unlimited now! Then get into a new Kraven story as HUNTED begins in AMAZING SPIDER-MAN #16!