Revisiting 'New Warriors' in the '90s with Artist Darick Robertson

When it comes to comics, the name “Darick Robertson” conjures up the sterling reputation of a well-respected professional amongst fans and peers. Highly regarded for turns on WOLVERINE (2003) and NIGHTCRAWLER (2004) as well as mature takes on Nick Fury and the Punisher plus legendary projects elsewhere in the industry, Robertson catapulted to Marvel superstardom when he took over artistic chores on the original volume of NEW WARRIORS in 1992 with issue #26.

“[Original NEW WARRIORS artist] Mark Bagley was about to depart to take over as the regular artist on AMAZING SPIDER-MAN and I had a good relationship with [the book’s writer] Fabian Nicieza at the time,” relays Robertson. “Editor Danny Fingeroth had me create a couple of audition pages without a script, just asked me to have Spider-Man fighting the New Warriors. I did the audition pages, eager to have a monthly gig, and even though Danny didn’t like them—I didn’t either to be fair—he saw the other work I was doing on WONDER MAN ANNUAL #1 and such at the time, and gave me the gig anyway.”

While Darick feels it took him a few issues to find his footing with the Warriors, the chemistry with Nicieza and Fingeroth existed immediately, as “[he and] Fabian remain great friends to this day." The artist “really enjoyed the run” claiming he “was given a lot of room to grow.”

While team leader Night Thrasher had recently launched a solo series and thus remained off limits for visual reimagining, over his time at the Crashpad, Robertson would tweak Nova and Firestar, plus completely revamp Marvel Boy and Namorita as Justice and Kymaera. “I absolutely loved drawing Speedball and Rage together,” he adds. “I wanted to do my own spinoff book about them. I even wrote a couple of Speedball solo tales for the annuals.” 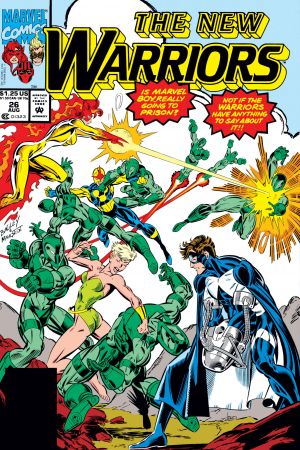 As far as standout storylines, he remembers the “Family Values” arc from issues #37-39 wherein a street gang called the Poison Memories targeted the team through their families, even killing Rage’s grandmother, as a high point. “It had a lot of emotion and Rage really developed as a character through that.

"I also revamped Speedball and Rage," he continues. "Along with a streamlining of his costume, I gave Speedball a leather trench coat as a bit of a gag to the mid-90s trend of all the Marvel heroes suddenly wearing jackets. A long coat on Speedball was my idea of Robbie Baldwin trying to fit in and be cool, even though a long coat with his powers was rather impractical."

Before wrapping up with the extra-sized issue #50, which culminated the “Time and Time Again” epic featuring the time-traveling Sphinx, Robertson steered the Warriors through INFINITY WAR, co-created Turbo and Darkling, took Nova to space and back, and gave his own takes on Spider-Man, X-Force, and more along the way.

“It was a crazy time in comics and I was young and eager, so I was getting a lot of opportunities to work for some new emerging companies, like Malibu’s Ultraverse, and design and create new characters,” Darick declares in reference to his eventual departure from NEW WARRIORS. “Meeting the monthly deadlines with my workload was getting more difficult, so I was looking to have more flexibility. I loved the book and working with Fabian, but he was ready to let it go as well after 50 issues. 25 issues seemed like a nice even number.

“I’d still love to do a reunion story, set in the '90s timeline, just to revisit those characters with Fabe and bring my decades of art evolution to the page and draw the Warriors again.”

Earn Points, Get RewardsJoin NOW!
In this article: New Warriors

The classic team reunites to mentor a new generation of heroes!

Thrasher reunites with Firestar, Rage, Speedball, Namorita and Silhouette to mentor a whole new generation of heroes…whether they like it or not. Introducing the NEW New Warriors – and the epoch of their thrilling new adventures!