Runaways: How Things Have Changed for Molly

Does the youngest Runaway want to reunite the team?

When the Runaways broke up, it was the end of an era. But the team members all had to go on with their lives in their own ways. For Molly Hayes, that meant living with her grandmother and moving forward as a relatively normal tween. Will she want to give up that stability to jump back into the fray with her old pals? We talked with writer Rainbow Rowell to find out more about RUNAWAYS #4.

Marvel.com: Gert drove the effort to get the team back together. The others seemed kind of reluctant at first. You’d expect Molly to feel the most enthusiastic — as the youngest, she always really wanted to feel included in the group with the older kids. But now she has a normal life of her own, and she may not want to walk away from that.

Rainbow Rowell: I think Molly was part of what kept the older kids together back in the day. She needed a family, she needed to be taken care of… It would have been so much easier for the older kids to drift apart without Molly – and later, Klara Prast, the 12-year-old mutant they rescued from the past.

Letting Molly go really weighs on Chase and Karolina and Nico’s consciences. But what were they supposed to do? Molly has a grandmother who loves her and wanted to take care of her. She has real family, so to speak.

When the rest of the kids come back for Molly, in Issue #4, she doesn’t see it as a choice, Runaways versus her grandma. She can have both. She loves them all.

It’s really Gert who sees it as more of binary decision – are you with us or not?

Marvel.com: It makes sense that sticking with her normal life would seem appealing. But at the same time, no one will really ever relate to her or understand what she has gone through like the other Runaways.

Rainbow Rowell: That’s true for all of them, I think.

The Runaways has always been less of a team and more of a club – the “My parents were evil, so I sold them out, and now they’re dead” club. Maybe that’s why Victor fit in so well. He met the membership criteria. 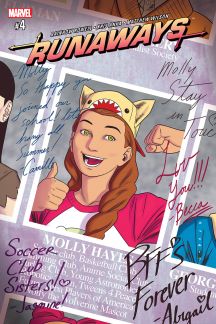 Marvel.com: Molly always had intelligence and bravery, but she also had a silly, light-hearted side. Have events that happened since the last time we saw the team changed that at all? Where do we find Molly psychologically and emotionally these days?

Rainbow Rowell: Molly is a little older, a little more mature. But she’s still Molly. She’s still high-spirited, open-hearted. She still wears the cutest hats. Molly came into this world to have fun and be with people she loves; she doesn’t waste time on chumps.

If anything, being with her grandma and having some stability has allowed Molly to be even more carefree. She feels safe for the first time in a long time.

Marvel.com: Since all the drama that went down previously happened to Molly at a younger age than the others, did it have more of an effect on her as she started to grow up?

Rainbow Rowell: Molly didn’t really witness her parents’ depravity the way the older kids did. They protected her from the worst truths. And I think, because of that, she’s not as convinced that her parents were bad guys. They were loving parents to her. They were good. How do you process that at 11? At 13?

In a way, her grandmother is giving Molly a second chance to connect with her parents, with the ways they were good.

Marvel.com: Would you like to tease or mention anything else?

Rainbow Rowell: Well, Issue #4 is special to me because it’s the issue that brings Victor Mancha back to the Marvel Universe in a real way.

Victor died (sort of? mostly?) in the VISION series, one of my all-time favorite Marvel books. But we came up with a really cool and compelling way to bring him back. And I am just elated about it. Victor’s an absolute joy to write. He’s smart, humble, kind – he has a wonderful dry sense of humor.

I love writing him, Kris [Anka] loves drawing him. Victor isn’t an original member of the Runaways, but he’s a core member. I just couldn’t imagine doing this book without him.