Trouble rumbled through the pages of 1969’s AMAZING SPIDER-MAN #68 by Stan Lee and John Romita. The issue kicked off with Kingpin learning of an ancient clay tablet on display at Empire State University that he wanted, even if it meant throwing down with Spider-Man once again. Meanwhile, Spidey swung around after his battle with Mysterio, grumbling about not snapping any pictures of the fight. He got home only to find that his roommate, Harry Osborn, had locked the window!

The next day Peter Parker went to school on the E.S.U. campus and met Robbie Robertson’s son Randy. Moments after, a fellow student named Josh asked the young scholar about his thoughts on an on-campus issue; apparently the powers that be at the school intended to close down the exhibition hall and turn the building into rooms for visiting alumni. Josh represented a group that wanted the administration to turn that space into low-rent housing for students with financial difficulties.

Things looked up for our hero after he ran into Gwen Stacy and had a nice visit with Aunt May, but we readers learned that the latter had received some bad news from the doctor that she didn’t relay to her nephew. Back on campus the next morning, a protest had begun in an effort to convince the school to turn the hall into cost effective student housing. Josh wanted to take the building by force if necessary which did not sit well with Mr. Parker who pushed away from the group and went inside the hall to look at the tablet.

With enough of a crowd listening to him, Josh called for everyone to rush the hall. Kingpin saw this on TV and realized it would be the perfect distraction to steal the artifact. For his part, Peter also took advantage by snapping pictures of the demonstration. At dark, the villainous crime lord and his crew showed up and used an explosion to draw focus away from them as they ran into the not-so-secure location. Inside, Wilson Fisk actually came face to face with Peter Parker for a moment. As the Kingpin of Crime made his way to his goal, our hero ducked into a corner and changed into the Friendly Neighborhood Spider-Man. 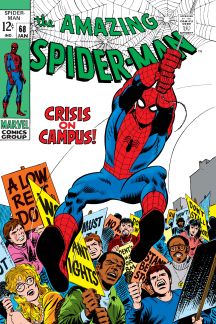 In the chamber holding the artifact, Spider-Man and Kingpin finally battled, with the well-dressed crime boss reminding the hero that his white jacket hid muscles galore. During the fray, Randy ran in and got smashed into a wall by the villain. Spidey grabbed him and escaped as part of the hall came crashing down and Fisk made off with the tablet. In the next issue, the police questioned Randy and Josh, assuming they had helped Kingpin with his plot. Meanwhile, out in the world, the villain allowed Spider-Man to find them, but the Wall-Crawler didn’t fall for the trap. The pair battled fiercely until Fisk’s cane gun backfired on him.

When the cops showed up, Kingpin lied and said that he and Spider-Man were actually allies. So, when the police saw Spidey him later, they opened fire. Peter wound up with the tablet in his possession until AMAZING SPIDER-MAN #71 when he gave it to Captain Stacy right after proving the kids didn’t have anything to do with Kingpin’s crime.

Thanks to Peter’s pictures of Kingpin’s attack, Randy Robertson avoided an unjust prison stay. Afterwards the two became friends, but Randy eventually met a woman named Mandy and the two got married. After they split up, the younger Robertson returned to New York City and started rooming with Parker. Years later, Dan Slott brought him back in the pages of AMAZING SPIDER-MAN. He started a relationship with Front Line reporter Norah Winters which didn’t sit well with Phil Urich, who doubled as The Hobgoblin. The two broke up after the events of Spider-Island when Norah made more of an effort to cover the story than to save Randy’s life!

Next time, tragedy strikes Peter Parker once again when Green Goblin and Gwen Stacy have a date with destiny in the pages of AMAZING SPIDER-MAN #121!

Daredevil: A Romantic Recap on Matt Murdock and Elektra