One of the best parts about being a comic reader? Bringing new fans into the fold! Comics might not be exclusively for kids anymore, but there remain plenty of all-ages books to share with children and other new readers including MARVEL ADVENTURES SPIDER-MAN!

Renowned creators like Jeff Parker, Sean McKeever, Mike Norton, Zeb Wells, Peter David, Fred Van Lente, Pop Mhan, Ryan Stegman Todd Dezago, Roger Langridge, Paul Tobin, and Chris Samnee all jumped in at various times to tell tales starring not only Spider-Man, but also a variety of other characters from the Marvel Universe! Instead of fully re-telling the original Stan Lee and Steve Ditko stories, these take cues from those while branching out in new directions along the way. The first issue covered the origin while the next two pitted the Web-Slinger against the Sinister Six and the fourth teamed up Spidey and Human Torch first to fight a guy called Street and then the giant monster Goom! 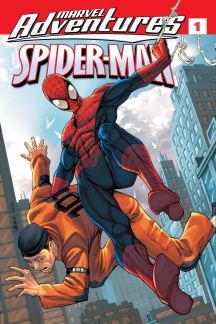 No matter the threat he faced or the fellow heroes he met up with, Peter Parker balanced all of that with the usual life of a high school science genius whose classmates just don’t understand him. In other words, MARVEL ADVENTURES SPIDER-MAN worked with all of the building blocks of Spider-Man without getting too dark.

Whether you get your hands on the original issues, trades, or the digital versions, these stories make for a fun and exciting entry-point for new readers. In addition to getting to know the basics of Spider-Man and the Marvel Universe, they also offer a great entry course in the ways of actually reading comics.