Back in 2000, Marvel came up with this wild idea to start a new imprint with a few writers who had promise along with some established artists. Of course, that resulted in the Ultimate Universe and books like ULTIMATE SPIDER-MAN by a couple of guys named Brian Michael Bendis and Mark Bagley. The series ran for years with the same creative team.

Bendis and Bagley kicked their run off with a seven-issue take on Spider-Man’s origin that really dove in and fleshed out a lot of the details while also updating the setting and adding new threads. For instance, the spider that bit Peter actually came from one of Norman Osborn’s labs, which connected the two right from the get-go. In an effort to replicate the results found in Parker, Osborn injected himself with a similar concoction that turned him into The Green Goblin.

After facing off against the Goblin for the first time, Peter scored a gig at “The Daily Bugle” and soon found out about a mobster calling himself The Kingpin. He then took on the master criminal as well as his goons, the Enforcers, and Electro.

With that adventure out of the way and having put a wedge between him and next-door neighbor/friend Mary Jane Watson, Peter decided to have a heart-to-heart with the young lady. In a major shift away from tradition, this version of Parker revealed to MJ his secret identity as Spider-Man! Understandably skeptical, Mary Jane laughed at first and denied the admission. So, Peter did the only thing he could: he jumped onto the wall, then stuck to the ceiling. First he explained where the powers came from, then he said taking her web-swinging would be too dangerous and then explained that she could never tell anyone. 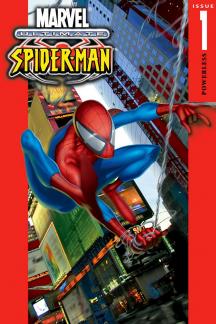 He also answered another important question, namely why he told her about all of this even though he knew it could be dangerous: “Because—you know—I’ve been really hurting your feelings lately because of this. Always running away or-or not being where I say I am going to be and—and you deserve better than that—you-you-you deserve to know the truth and—I just—I needed to tell you.”

Mary Jane then admitted she thought he brought her to his room for a first kiss, which seemed like a good idea until Aunt May busted in with Mary Jane’s mom on the phone talking about hanky panky and being safe. Even with proper amounts of mortification running through him, Peter still felt enough happy to enjoy the moment afterwards.

Peter and Mary Jane’s relationship went through a lot of changes over the rest of his life, as they broke up and got back together a number of times. She mourned him when he seemingly died, but the two reunited after he resurfaced and left to travel the country while Miles Morales continued his efforts as Spider-Man.

The ULTIMATE SPIDER-MAN comic book offered more than just its name to the Disney XD animated series that wrapped up with its fourth and final season back in January. “Marvel’s Ultimate Spider-Man” focused on a high school aged Peter Parker who went from new hero on the block to someone worthy of not just Avengers membership, but also saving time and spice with his fellow Web Warriors. The show did differ in one major respect, though: Peter attended a high school run by S.H.I.E.L.D.! This gave him a great reason to hang out with fellow student-heroes like Luke Cage, Nova, White Tiger, Iron Fist, and others!

Next, Jeph Loeb and Tim Sale explore the impact of Peter Parker’s relationship with Gwen Stacy in the pages of SPIDER-MAN: BLUE!