Get a tease of what's in store!

All the cool kids read Secret Empire–where the action’s at in the Marvel Universe these days. So of course, we had plenty to chat about during the Secret Empire panel at San Diego Comic-Con last Friday. For those of you who couldn’t attend, check out this recap of all the latest news.

This week’s SECRET EMPIRE #7 will continue the super dramatic events we’ve seen unfold over the last year. And you really, really need to read it for one important reason. Remember way back in Civil War II when Ulysses had a vision of Miles Morales killing Steve Rogers? That finally comes to fruition in this issue, so true believers should definitely check it out. 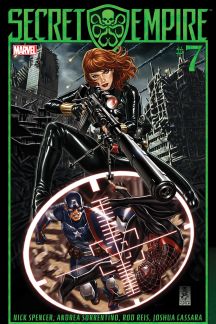 As we know, Steve Rogers finds himself at the center of Secret Empire, and this has totally blown up the Cap corner of the Marvel Universe! If you plan to read one Secret Empire tie-in, make it the upcoming CAPTAIN AMERICA #25 to see how Steve’s saga continues to develop.

When Secret Empire wraps up, we’ll have an epilogue that ties up the loose ends in SECRET EMPIRE OMEGA. This oversized issue will serve as an important finale, allowing the story to come to a close in a way that’s exciting and emotionally satisfying for readers who have followed the story since the beginning.

As a major event in the Marvel U., Secret EmpireE has plenty of tie-ins. AVENGERS has given us a look at a team we think of as, in a sense, the “Dark Avengers”–the team Steve Rogers has put together in his current, Hydra-influenced state. The team includes Scarlet Witch, Thor Odinson, Vision, Black Ant, Deadpool, Taskmaster, and Superior Octapus. Lots of interesting character dynamics here–particularly between Ock and Wade!

We’ve seen the Champions getting involved in the Secret Empire storyline in some pretty significant ways, and that will continue with the upcoming issue. After Civil War II, we saw the young heroes strike out on their own, hoping to serve the public in their own way. Now, they have to reunite with the old guard in order to help take down Hydra.

The Champions aren’t the only group pooling their efforts to fight Hydra. The Inhumans Quake, Karnak, Moon Girl, Ms. Marvel, and Inferno also put their plans into action in order to fight the villains. But unlike the Champions, these characters don’t necessarily see themselves as a “team.” They’ve got different agendas and different approaches to accomplishing their goals. The pragmatic Quake and the idealistic Kamala clash frequently, and Karnak has started doing his own thing, too (though we don’t know why yet–stay tuned!).

The Secret Empire story has ramifications for Peter Parker, as well. In the upcoming AMAZING SPIDER-MAN #31, we’ll see the story continue to play out. How could it not, with Superior Octopus in the mix? Parker Industries, headed by Peter, has built some pretty awesome spider equipment, which played an important role recently in overthrowing an actual government! If that equipment gets into the hands of someone like Ock, bad things would definitely happen–especially now that he has jumped on board with Hydra!

Plenty of drama going on for the U.S. Avengers as a result of Secret Empire! Toni finds herself trapped in a cell with a dying Roberto, and she’ll have some important decisions to make (will she follow in her father’s footsteps??). Also, Squirrel Girl and Enigma go to Europe and have delightful adventures in Paris! Check it out in the upcoming issue #9.

When it comes to formidable Marvel U baddies, we’d consider Baron Mordo pretty near the top of the list (you know, maybe not at the Galactus level, but still). Now, Mordo has taken over the Sanctum Santorum–definitely not a good thing! How will that play out? In the upcoming DOCTOR STRANGE #25, we’ll get to see our favorite sorcerer take on his foe and team up with Spider-Woman.

Another character whose story has been pretty profoundly impacted by Secret Empire. On orders from Steve Rogers, Deadpool has killed one of the sweethearts of the Marvel Universe – Phil Coulson! To see how this impacts the fate of the Merc with a Mouth, pick up the next issue, DEADPOOL #35.

Carol Danvers has found herself at the center of the Secret Empire action–and things certainly haven’t always gone well for her. As we’ve seen, Steve trapped Carol and her team outside the shield that now surrounds the Earth, introduced by Maria Hill and intended to protect the planet from hostile aliens. As a result, they’ve had to fight of wave after wave of Chitauri invaders. To catch the latest in Carol’s story, check out MIGHTY CAPTAIN MARVEL #8.

It wouldn’t be a Comic Con panel without a big announcement! Secret Empire will come to a close relatively soon, but the story of Steve Rogers will continue. And here’s the amazing news–Marvel has tapped writer Mark Waid and artist Chris Samnee to bring Steve into the next chapter of CAPTAIN AMERICA! The story will feel, in a lot of ways, like a return home to the Cap we know and love, and it will explore Steve’s identity and role in the Marvel U. after the events of Secret Empire. As Mark Waid explained during the panel, “Steve is tired of being the couch surfer of the Marvel Universe. He’s hasn’t had a place that he’d call his own, except for Avengers Mansion, for a long time.” We’ll see Steve trying to figure out where he belongs–and with these two at the helm, the story won’t disappoint!