In a way, it always had to come back down to the men who wielded the shield. SECRET EMPIRE kicked off when Steve Rogers revealed himself to be the head of Hydra, surprising everyone, but most of all his former partners Sam Wilson and Bucky Barnes. Wilson gave up the Captain America mantle to focus on helping people get out of America while Bucky played dead until the time to strike seemed right.

With Rogers revealing his new Cosmic Cube-powered, yellow and green armor at the end of SECRET EMPIRE #9, the time seemed perfect. Rogers displayed exactly how powerful he’d become by not only defeating the assembled Avengers, but also wiping them from existence and completely re-writing history.

Wilson, Barnes and Ant-Man hung back, or maybe part of Rogers didn’t want to see them go. Wilson handed over the last Cube fragment as well as Rogers’ shield, but that all proved a ruse to get a shrunken Bucky inside the Cube with Kobik and her memory’s of the real Steve Rogers!

Rewinding a bit, you might wonder where exactly Bucky’s been during this whole event. Well, in the pages of THUNDERBOLTS, Baron Zemo appeared to have killed him, but in reality Kobik saved the man she considered a friend and protector. 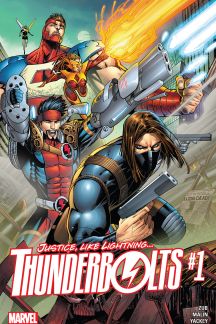 Playing to the advantage of his presumed death, Bucky made his way to Atlantis where he disguised himself as one of Namor’s advisors and eventually revealed himself to his fellow Invaders in SECRET EMPIRE: BRAVE NEW WORLD.

Back in the present, Bucky reached into Kobik’s consciousness and pulled his friend back into existence. He succeeded in saving his friend, where Rogers had failed with Bucky during World War II.

With the real Captain America standing in front of them for the first time in ages, Bucky and his friends simply watched as two sides of the same coin battled each other nearly to death.

In the end, Bucky’s faith in the goodness of his friend, Steve Rogers, proved the most important thing he, or any of his fellow heroes, could believe in. Thankfully, he and everyone else on the planet was rewarded for believing in a true hero.

SECRET EMPIRE might officially be over with this tenth issue, but there’s still more to look forward to. As seen at the end of this story, Kobik sent the Legacy heroes through a Vanishing Point that will be more fully explored in the GENERATIONS one-shots. The aftermath will continue through some of the monthly titles, while SECRET EMPIRE: OMEGA will examine how, or if, Captain America can regain the trust of the people.