The sentient Cosmic Cube begins to understand her role in Secret Empire.

It all started with a Cosmic Cube who believed it was a person. That’s the basic truth behind the events of Secret Empire, though far from the full story.

Kobik’s origins reach back to her first mention in MARVEL NOW! POINT ONE #1, though readers didn’t get a full look at her until AVENGERS STANDOFF: WELCOME TO PLEASANT HILL #1. In that crossover, we learned that Maria Hill put a plan into place that would use parts of a Cosmic Cube to re-write villains’ memories so that they would fit in nice and happy in a small town dubbed Pleasant Hill. 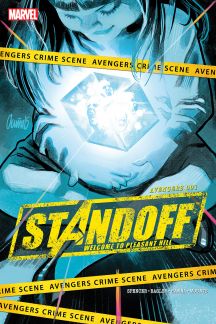 In AVENGERS STANDOFF ASSAULT ON PLEASANT HILL ALPHA #1, Kobik’s origins were revealed. Initially, S.H.I.E.L.D. intended to use pieces of a smashed Cube to make their jail a reality, but the chunks joined together to create a kid named Kobik. That, of course, didn’t stop Hill and company from using her to achieve their goal anyway.

The Cosmic Cube prison idea started making the rounds in public early on in CAPTAIN AMERICA: SAM WILSON, though it took Rich Jones’ work as the super-hacker Whisperer to get the word out Pleasant Hill. Jones actions lead to heroes like Wilson, Steve Rogers, Bucky Barnes and eventually the rest of the Avengers to make a move on the prison as Baron Zemo and other baddies started regaining their memories.

During the conflagration, the then-old Steve Rogers found himself returned to his more youthful status thanks to a run-in with Crossbones that lead to him needing some healing from Kobik.

What no one knew at that time was that Red Skull had been influencing Kobik from the beginning. Upon gaining sentience, she desired to meet someone who loved her and no one loved their old Cosmic Cube like the Skull. Through their interactions, the Hydra leader indoctrinated the young woman in his ways of hate, even teaching her completely false news-laced history.

Even worse, Skull essentially programmed Kobik to not just rejuvenate Steve Rogers, but implant a series of false memories that lead to his “Hail Hydra” shocker in CAPTAIN AMERICA: STEVE ROGERS #1 and everything that lead up through this week’s SECRET EMPIRE #9. 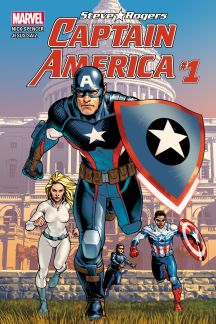 After Standoff, Kobik spent time with Bucky Barnes in the Thunderbolts as well as some of the former villain pals she made in Pleasant Hill. She even went so far as to attempt to rewrite Bucky’s past to make him a Hydra agent, but he rebuked the very notion. When Bucky attempted to explain the reality of Hydra to Kobik, she flipped her wig and nearly destroyed everything in existence until Fixer blasted her, shattering her into the Cosmic Cube fragments.

The heroes have been looking for these pieces since Secret Empire began, but as we learned this week, Hydra attained all but one which lead to the souped-up version of Rogers seen at the end of the issue.

However, a glimmer of hope exists within Kobik herself. Another reveal in #9 came when Steve Rogers realized that he had been existing in a kind of ghost world inside her mind. Having regained much of himself, he seemed ready to jump back into the battle, assuming he could get his hands on a body, of course!

If you’re wondering which of the many Cosmic Cubes used by Red Skull resulted in Kobik’s strange relationship with the madman, look no further than Mark Waid’s run on CAPTAIN AMERICA with Ron Garney which ran from CAPTAIN AMERICA #444–448. Though presumed dead thanks to the Super Soldier Serum turning on him, Rogers soon woke up to the sight of the long-thought-dead Sharon Carter and the Red Skull. All three had to team up to save their own skins – reality itself – from a Hitler-infused Cosmic Cube. Upon succeeding in that task, the Skull gained control of the Cube itself and did some of his own historical re-writing, but Rogers broke free and used his shield to shatter the Cosmic Cube, slice off the Skull’s arm and blowing everything up. That seemed the end of that particular Cube until Red Skull revealed the true history in CAPTAIN AMERICA: STEVE ROGERS #2. 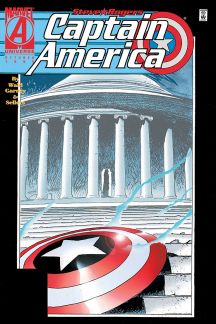 In this article: Kobik, Cosmic Cube