Victor Gischler on the threat the Covenant poses to Ghost Rider, Blade, Satana and Hellstrom.

In the beginning… Marvel created their own version of Heaven and Hell for their creators to have a devil of a good time with. Much later, writer Victor Gischler brought together a grouping of the Marvel Universe’s shadowy anti-heroes in SPIRITS OF VENGEANCE and said, “Let there be a story!”

SPIRITS OF VENGEANCE #3, available December 6, will mark the half-way point in the limited series that teams Ghost Rider, Satana, Blade, and Hellstrom against all-powerful Covenant, and we thought’d be the perfect time to check in with Gischler about what he’s done and where he’s going.

Marvel.com: Victor, when you were outlining this series, what did you feel would be your greatest challenges in bringing these characters together?

Victor Gischler: They’re all such good characters that one of the challenges was making sure they all got quality face-time. These characters could easily each have their own books—and have, I guess—so when you bring that much star power together, it’s important to give each of them some room to strut.

Marvel.com: Who among the cast could or should be the leader in any given situation, in your opinion?

Victor Gischler: I suppose that any of them could step up, depending on the circumstances, but the way we’re approaching Hellstrom in SPIRITS OF VENGEANCE makes him the natural leader. He’s sort of the Reed Richards of the group. It’s pretty cool because the guy is really two characters in one: the dapper Hellstrom and the fiery Hellstorm.

Marvel.com: That’s a great analogy. So, Marvel’s had many different “takes” on Heaven and Hell in the comics over the years—where did you begin to pull together your “mythology” for this project?

Victor Gischler: I had a very religious fire-n-brimstone grandmother who told me just about every Bible story there is. There’s a lot of unfinished business there. Just seems like Hellstrom and company would be some of the people to get in on those things. 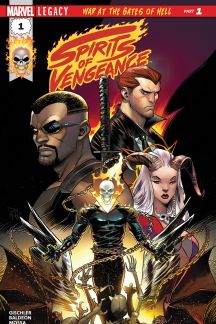 Marvel.com: Where did the basic idea for the Covenant come from? What about it made you feel it would be perfect to be in this story?

Victor Gischler: If you think about it, the Bible is full of “agreements.” I mean, the very first two people on Earth are told “eat from any tree but this one and you’ll be fine.”  So agreements—and the consequences for breaking those agreements—are something we see a lot of in the Bible. The Covenant is an extension of that theme. Also, the Covenant provides us with a big “threat to the world” event. You don’t bring Ghost Rider, Blade, Hellstrom, and Satana together just because there’s a couple of minor demons picking pockets down at the bus station.

Victor Gischler: I’d absolutely consider it. There’s a lot of potential to tell more of these kinds of stories. And I think the group is perfect as-is. A great, tight little team, so I wouldn’t look to add a permanent member to the team. But, [that said] it’s the perfect situation for guest stars, and there are plenty of Marvel horror types who could show up. Our old pal Danny Ketch would also be an obvious guest star. Just so many things we could do.