Luke, Leia, Lando, Chewie and the droids deal with a post "Empire" galaxy.

Last time we visited the original run of STAR WARS from Marvel Comics, the issues chronicled the adventures seen on the big screen in “The Empire Strikes Back.” That film, of course, ended with Han Solo kidnapped in Carbonite and Vader telling Luke about his parentage.

Fans would have to wait until 1983’s “Return of the Jedi” to find out what happened to all of their favorite characters…unless they read the Marvel series! Now part of the Legends continuity, STAR WARS #45–48 showed some harrowing adventures featuring Luke Skywalker testing his new hand in space, Lando Calrissian and Chewbacca in the Millennium Falcon, C-3PO and R2-D2 on Droid World and Princess Leia facing off against Darth Vader on a banking planet.

In the first issue, Archie Goodwin and Carmine Infantino shined the spotlight on Luke as he flew in his X-Wing fighter for the first time after getting a robotic replacement hand. Perhaps that explained his slow reflexes and the destruction of his transport. Thanks to some clever thinking and use of the Force, he and Artoo made their way to an Imperial ship that housed a rampaging Probe Droid. Ultimately, though, our heroes walked away with both their skins and a win as they blew up the Imperial ship and made off with another X-Wing. 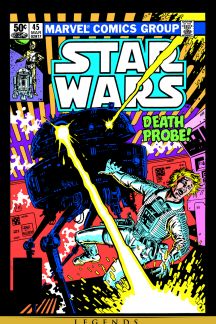 Lando and Chewie took center stage in STAR WARS #46 by Wally Lombego and Infantino as they flew the Falcon in an effort to find their good buddy Han. Instead, they stumbled upon a legendary Rebel fighter named Cody Sunn-Childe who had turned away from violence upon gaining an immense amount of power that allowed him to essentially create his own pocket of reality. However, with the Empire always looking for more worlds to conquer, they soon appeared on Sunn-Childe’s metaphorical doorstep and brought the war to him. 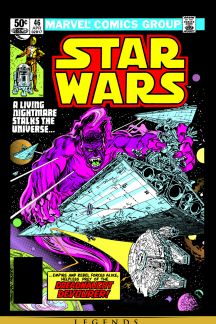 From there, Goodwin and Infantino sent Artoo and Threepio to another world intent on staying out of the fracas between the Empire and Rebellion: Droid World. Their mission revolved around getting schematics for the Empire’s Warbot, but they stumbled upon a robo revolution in the works. After the war came to a close, Droid World overseer Kligson turned the whole place into a rocket and took off for deeper space to move even further away from the Empire’s reach. 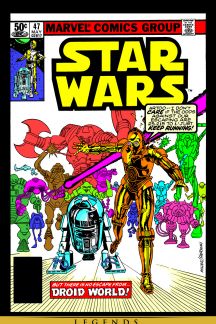 Finally, in STAR WARS #48, Larry Hama and Infantino saw Leia visit the banking planet of Aargau to strike a deal to get funding for more X-Wings. To everyone’s surprise, Darth Vader also happened to be on planet as well. Using a series of schemes that still follow the rules of the planet, he tries to kill her and Viscount Tardi while she defends them all using her cunning. The pair even face off against each other with Vader wielding his lightsaber and Leia, a blaster. That ended with a draw, each one going their separate ways, not fully succeeding in their plans, but also not fully failing. 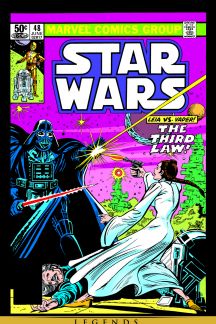 Let’s talk about some of the legendary creators involved in these few issues. Goodwin and Infantino racked up impressive runs and takes on these characters. You might notice another famous name in this batch if you look at the cover to #47, which a guy named Frank Miller composed (as well as #43 from the previous arc). Fellow legend Larry Hama also got in on the action by drawing the cover to #45 and writing #48. You might also wonder about the writer of #46, a fella named Wally Lombego. That’s actually J.M. DeMatteis, who took his real name off the project after interior changes altered his vision for the story’s main message of pacifism.

Our heroes plan a jail break in STAR WARS #15–19 by Jason Aaron, Kieron Gillen, Leinil Yu and the gang!