Jahan Cross returns on a mission filled with familiar faces!

When last we saw Jahan Cross, he’d hitched a ride with his old pal Han Solo to a planet called Reltooine at the request of The Emperor to get involved with the droid-making Stark family. Not long after, he went on his—up to this point—final mission in the pages of AGENT OF THE EMPIRE – HARD TARGETS.

The five issue limited series debuted in 2012 from Cross co-creator writer John Ostrander and artist Davidé Fabbri. It kicked off on the planet Serenno as the Emperor’s number one spy rumbled with a familiar face—or rather helmet—in the form of Boba Fett!

From there the story jumped 10 days backwards into the past as Cross returned to his home planet of Alderaan and met with Bail Organa as well as Princess Leia. Not long after Cross and Leia displayed a friendly and familiar relationship with one another, the party grew to include the new Count Adan Dooku and his son Bron as well as head of security Candra Tymon. Later, in private, the true meaning of Organa’s invitation to Dooku became evident: he wanted the Count to back the brewing Rebellion. This offered Cross the perfect opportunity to assassinate Dooku while wearing a copy of Boba Fett’s armor. 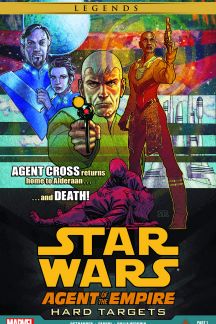 Back on Coruscant, Cross received the next phase of his mission: to actively work against his own father in guiding the Five Great Families to elect the Empire’s chosen delegate as Bron’s regent. As the representatives fought over the role on Serreno, Cross learned more and more that his beloved Empire might not be as benevolent as he originally thought.

On top of the political intrigue, the story also featured pirates, kidnapping, high-tech espionage, rekindled old flames, bar brawls, an epic prison break, an underwater chase, impressive cons, and the ultimate righting of some very serious wrongs. And, of course, it ended where it began with a classic battle between Cross and Boba Fett with the life of Bron hanging in the balance.

If all of the Count Dookus in this story come off as a little confusing, here’s a brief history. The version seen in the Prequels first appeared in “Attack of the Clones” played by Christopher Lee. Also known as the Sith Lord Darth Tyrannus, this Dooku lead the Separatist movement. In “Revenge of the Sith,” Tyrannus kidnapped The Emperor as part of Palpatine’s plan to turn Anakin Skywalker to the Dark Side. The future Darth Vader allowed his rage to take over and freed Dooku’s head from his neck with ease. Count Adan Dooku, seen in HARD TARGETS, was actually Tyrannus’ nephew. He was raised away from Serreno when the planet became embroiled in intergalactic politics. His son Bron, then became the center of this story, but ultimately escaped to Alderaan where his fate may have been sealed by Darth Vader in “A New Hope.”

Next time we delve into SPLINTER OF THE MIND’S EYE, an adaptation of the very first original Star Wars novel.