Luke Skywalker and his pals found themselves wrapped up in some wild family politics in the pages of STAR WARS #35–37 from 1980. In the first installment of the Archie Goodwin and Carmine Infantino trio of issues, Darth Vader discovered the name of the young man who blew up the Death Star and then found out what happened in the previous arc from General Tagge.

Disgusted at Imperial General Tagge’s inability to destroy the Millennium Falcon, which held all of his enemies in one place, Vader questioned the new Baron’s motives. He then revealed that his two brothers actually survived the attack, but remained in suspended animation. The message became clear: if he wished for them to stay that way, Tagge had better stop working against the Empire.

Some time later, Luke and Blue Squadron stumbled upon TIE Fighters chasing a ship in the patrol pattern around Yavin-4. They escorted the target craft to base and met Sister Domina of the Order of the Sacred Circle. She explained that, while their planet Monastary usually stayed neutral in matters of galactic politics, Vader recently appeared to plead the Empire’s case and she hoped that someone from the Rebellion would return with her to do the same for that side.

Leia’s name first jumped to the top of the list, but Luke also wanted to go. Domina explained that they’d only allow one representative and she suggested the young man. The council agreed and he flew off with them the next day joined only by R2-D2, followed by the Falcon and its usual occupants to keep an eye on their boy.

Later, after landing on Monastery with Luke, Domina spoke in private with Vader, revealing herself as a member of the Tagge family. In fact, she even blamed Luke for one of her brothers’ deaths, not knowing that he still lived! 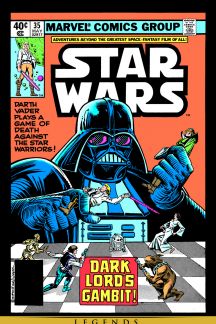 As forces gathered with the goal of ending Luke on Monastery, a Star Destroyer moved towards the Falcon, intending to inspect the ship. They hid Leia, but soon had trouble when Wermis noted that their papers had been forged. Back on the planet, Skywalker went to defend the Rebellion only to find himself under fire from Domina Tagge.

In an effort to free the locked-up Han and Chewie, Leia set off charges, one of which woke up the previous Baron Tagge. She then grabbed her friends, got back to the Falcon, and took off only to discover that Tagge stowed away with them. He ordered an immediate landing on Monastery.

Down on the planet, Vader and Luke were led to the Crystal Valley to battle after following their own paths. The Falcon landed not long after, but they didn’t arrive in time to stop the rivals from beginning a lightsaber battle. However, Vader actually cast an illusion around Tagge as a dummy for Skywalker to attack. Without wasting much time, the good guys got back together and took off for relative safety.

Though it’s not mentioned much outside of these three issues, the Order of the Sacred Circle sounds an awful lot like it works hand in hand with the Jedi belief in the Force. From what little we know, the Order believes in “the ever-renewing circle of life.” The Force also works in a cyclical nature, as evidenced by many of the similarities in the stories chronicling its believers’ adventures. More so, it’s interesting to note how those very close with the Force wind up sticking around as ghosts, helping those still living deal with the challenges they face, essentially continuing the cycle of knowledge even when death enters the picture.

Next time, fly into action with the first POE DAMERON arc by Charles Soule and Phil Noto!