In the early days of the Empire, an insurrection almost cripples the Emperor and his minions!

New regimes always take a certain amount of time to truly establish themselves. Though “Revenge of the Sith” saw Palpatine take control and the debut of Darth Vader, it still took time for the Empire to become the nearly all-powerful force witnessed in “A New Hope.” And it almost all came crumbling down soon after inception!

The Haden Blackman and Agustin Alessio five-issue limited series STAR WARS: DARTH VADER AND THE GHOST PRISON introduced the world to Laurita Tohm, a valedictorian in the first class of Imperial cadets. As it turned out, he remained one of the few soon-to-be-graduates in his group not part of General Gantis’ plot to overthrow Palpatine by nearly killing him with a virus and blowing up sizable portions of Coruscant. His reasoning? He despised how many of his trainees the Emperor sent to their graves in his mad quest for power. 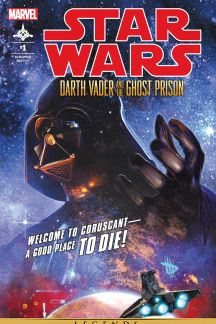 Tohm found himself in Darth Vader’s sphere of influence in the heat of battle and proved his worth. Before long, they made their way to the Emperor’s quarters to discover their leader a victim of poisoning. Trachta also stood by his side and the trio pledge to save Palpatine by taking him somewhere safe.

Remembering his days as a Jedi, Vader took Tohm to the old Jedi Temple where they both watched holovids of Anakin Skywalker wondering where his prisoners of war wound up. Though they refused to tell him, they discussed it after he left the conversation, letting Vader know about the ghost prison, also known as The Prism.

Set up as a way to hold dangerous prisoners during wartime, the prison essentially fueled itself and used but one Jedi as a guard. Vader made short work of her and his cohorts soon hooked Palpatine up to the facility’s advanced medical equipment to get him healthy again.

Realizing they’d need some kind of back-up in their mission to return Palpatine to power, Vader ordered all of the prisoners released and then told them to fight for their lives. 207 of them began the trials with only 33 surviving.

Meanwhile, Gantis continued amassing allies loyal to him, but still had to deal with Grand Moff Tarkin who left the nascent Death Star building site to come take command in Palpatine’s absence. Figuring out the play at hand, Vader and his crew contacted Tarkin and boarded his ship much to Gantis’ surprise!

Though Gantis had a good number of men on his side, they mostly ranked as new soldiers while Vader, Trachta and Tohm came backed by borderline maniacs and trained killers. They also had the revived Emperor on their side which turned the already tipping scales in their favor.

Afterwards, Trachta not only became a Grand Moff, but also took over as the new cadet trainer. He wanted to bring in the mercenaries as teachers or advisers, but Vader wanted to kill them. Tohm suggested they essentially exile them, a plan the Emperor agreed to. However, the ship exploded not long after take off which didn’t sit well with Trachta.

He made a much greater enemy in Vader, though, when Palpatine mentioned that the young man might make a worthy replacement if Vader ever fell in battle. The next time they saw each other, Vader tossed Tohm off a building while offering a piece of advice: “Never suffer rivals.”

Trachta first appeared in 2002’s STAR WARS: EMPIRE #1, a book that we will get to shortly. Without giving too much away at this time, that series took place many years later after Emperor Palpatine had fully gained control of the cosmos with the aid of Darth Vader. In GHOST PRISON, we see a younger version of the character who questions which side of the conflict between Gentis and Palpatine truly defended the ideals of the Empire itself and which acted the traitor. The way that Tohm and Vader handled the prisoners-turned-mercenaries also didn’t sit well with the man who revealed in GHOST PRISON #3 that he lost his eyes thanks to a Padawan releasing a detonator to avoid capture.

Next time we check back in on Kir Kanos with STAR WARS: CRIMSON EMPIRE II by Mike Richardson, Randy Stradley, Paul Gulacy and Randy Emberlin.