The Sith Lord continues to play with destiny and searching for Luke Skywalker!

One of the most interesting arcs of the first three Star Wars films revolves around Darth Vader’s evolution from stone cold villain to Luke-saving father. On the screen, we see him taking over Princess Leia’s ship, ordering her torture, capturing Han Solo, and all manner of other dirty dealings until he ultimately returns to the Light Side as he saves his son from Emperor Palpatine.

But, how’d he get there? In the first arc of DARTH VADER by Kieron Gillen and Salvador Larroca, the initial cracks started forming, literally, as he discovered that a boy named Skywalker had destroyed the Death Star. In issues #7–12, from the same creative team, Vader continues working against The Emperor and his new superior Grand General Tagge.

First Vader traveled to Tatooine to see the Luke’s home through his own red-tinted mask eyes. In the process he saw the aftermath of the young Jedi’s fight with Boba Fett from the first arc of STAR WARS. The place gave evidence that the boy had talent and an ability to commune with the Force but very little training. 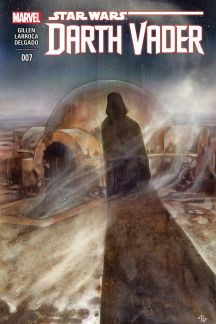 Next, Vader mysteriously set Aphra up to steal a great deal of credits from the Empire along with bounty hunters IG-90, Bossk, Krrsantan, and Beebox. The plan didn’t seem as profitable as intended, but Aphra soon revealed that she’d actually grabbed credits that seemed lost thanks to Vader’s backing.

The move proved somewhat costly, though, as Tagge assigned Vader an overseer named Inspector Thanoth. Tagge tasked the new partners with finding out who stole the credits. Being highly adept at reading a situation, Thanoth proved more than capable of figuring out what truly happened, leading Vader to work twice as hard to cover his tracks.

The investigation even led directly to Aphra at one point. As Vader grasped her by the throat, she let slip that she knew Luke’s whereabouts. The Sith Lord let her go and faked a trap to keep his duality a secret from Thanoth. After taking care of another plaguing problem—that of the Plasma Devils—Vader avoided further scrutiny, got the name from Aphra, and took off for Vrogas Vas!

If Grand General Tagge looks familiar that’s because he actually appeared in “A New Hope”! On the Death Star along with a group of other high ranking Imperials, including Grand Moff Tarkin and Darth Vader, Tagge argued that they should all take the threat of the Rebellion seriously, especially since they’d acquired plans to the Death Star. Tagge sat and watched as Vader choked the life out of Admiral Motti after the man mocked the armored one’s faith in the Force. As you’ll notice, he disappears partway throughout the film which means he definitely didn’t get killed when the Death Star exploded, allowing Gillen and company to incorporate him into the DARTH VADER series.