John Ostrander, Jan Duursema and Dan Parsons chronicle the birth of the Jedi.

The introductory #0 issue contained a handbook-style rundown of the people and places who would become very important in thisLegends continuity story ranging from Tho Yor to Xesh. 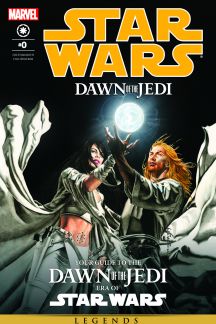 The line of limited series’ kicked off with the Force Storm storyline. Readers first discovered the Tho Yor, temple-like ships that visited worlds, drawing Force sensitives inside and then eventually moving on to Tython in the Deep Core. Once attuned with the Force, the Tho Yor left the main temple so the Je’Daii could hone their various skills on the danger-filled planet and achieve balance in all things.

The story itself picked up 12 years after Queen Hadiya lead some of the Je’Daii’s own children against them in the Despot War. Though she had been killed, plenty of damage had been done before her defeat.

Another threat loomed, the Infinite Empire, a group of Rakata using Force Hounds like Xesh to track down worlds they could use, so Tython immediately became a target upon sensing it in the Deep Core.

Je’Daii Journeyers Shae Koda, Tasha Ryo and Sek’nos Rath sensed a great disturbance in the Force, even seeing visions of Xesh before he crash landed right in front of them and attacked with his Forcesaber. The Je’Daii came out on top, but Xesh’s threat still loomed.

Eventually we learned that slaves on the Infinite Empire’s ship sabotaged them, leading to the crash and Xesh’s lack of memory. After facing their own pasts as manipulated by the growing Force Storm, the Je’Daii jumped in to save Xesh from an attacking beast. After tossing him his Forcesaber to help them, though, he simply walked away!

However, after watching the three Journeyers defend one another from a huge monster, Xesh broke from his years of selfish warrior programming and joined in to help Shae defeat the beast.

After quelling the storm and defeating Xesh, the Je’Daii healed the Force Hound and Tasha asked to look in his mind to help him sort out his memories. Once inside, she discovered that the Infinite Empire harnessed Force-wielders not only for space travel, but also as a planet-shaking weapon.

STAR WARS: DAWN OF THE JEDI #0 dives deeply into the world of this series and dropped plenty of interesting tidbits about what would become the Jedi Order. Upon becoming acquainted with the Force through meditation, the Je-Daii would then travel to various temples established all over the planet dedicated to knowledge, art, science, healing, martial arts, balance and even building weapons. Furthermore, the sense of balancing the light and dark in the universe stemmed from the planet’s moons Ashla and Bogan. Respectively bright and dark, if a Je’Daii seemed leaned too far towards one side, they would be sent to the corresponding moon and told to contemplate the other. After healing, the Je’Daii masters sent Xesh to Bogan so he could better understand the light.

Return to the original STAR WARS with Archie Goodwin, Carmine Infantino and the gang as they chronicle a post-“Empire” galaxy!