Star Wars Spotlight: Dawn of the Jedi – Prisoner of Bogan

In STAR WARS: DAWN OF THE JEDI – PRISONER OF BOGAN by John Ostrander and Jan Duuresema picked up two months after the first series in this epic tale of the early Je’Daii set roughly 36,000 years before the events of “Star Wars: A New Hope.” Originally published in 2012-2013, this Legends tale finds the one-time Force Hound Xesh trying to find balance on Tython’s moon Bogan.

Prior to this series, in STAR WARS: DAWN OF THE JEDI – FORCE STORM, Xesh originally worked for the Rakatan Infinite Empire, a group of conquerors who enslaved Force-sensitives and used them to fuel their ships and weapons. While tracking Tython, a Force-tuned planet and home to the Je’Daii, Xesh’s ship crashed, leaving him the sole survivor but lacking key memories of the incident. He also found himself in the presence of his first Je’Daii; at first he refused to help them, but once he saw how they fought for each other, he jumped into the fray. Having switched sides, the Je’Daii sent him to Bogan in an effort to reacquaint him with the Light Side after spending most of his life in the Dark. He also hoped to regain some of the memories he lost in the crash. 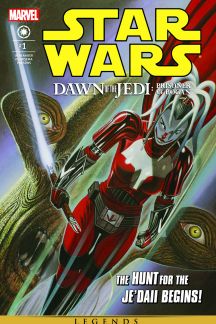 Xesh partially enjoyed his peaceful respite on the moon, but everything changed when the mad Je’Daii Daegen Lok attacked him with a trick dubbed the Mind Twist. Lok then showed Xesh a secret ship they could use to get off the moon and then described the vision he saw in a huge trench called the Chasm on Tython. The place had been forbidden because it drove explorers mad with visions. Lok accepted the unoffered challenge and, once inside, started muttering, “A creature with a single red eye…leading an army…a sword of flame…destruction…fire…death!” He conveyed this journey to the Council and all it got him was a trip to Bogan.

After Xesh recognized a part of Lok’s vision—the Forcesaber—the one-time Force Hound agreed that he could build one. He then filled the ship’s batteries with Force energy and they flew off to get crystals from Krev Coeur and then forge it on Nox. The Infinite Empire had no intention of letting Xesh roam free, so Predor Skal’Nas sent Trill, his own Force Hound, to track Xesh through space. 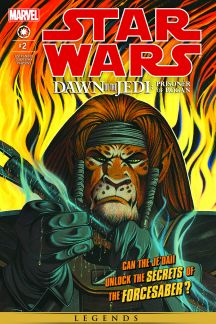 Meanwhile, Tem Madog, Master of the Forge on Tython, found himself befuddled by the Forcesaber they’d taken from Xesh. With a group of fellow Je’Daii, they soon sussed out that it could only be ignited by tapping into the Dark Side, something that not all of them could do at first.

As Xesh and Lok crashed on the crystal-covered planet Krev Coeur, the Je’Daii landed on Bogan and figured out that the two had teamed up. Lok’s friend Hawk further explained the vision of shadow warriors wielding light swords. Hawk knew this vision well because he had seen it too while accompanying Lok on his journey into the Chasm, though he spent his time on Bogan telling himself it never happened. Guessing at the fugitives’ mission, the Je’Daii split up, one group going to Krev Coeur the other headed for Nox.

Xesh and Lok obtained the materials they needed on the crystal world, then managed to create the hilt on Nox before moving on to find an army to lead. Daegon attempted to recruit those he fought against during the Despot War to no avail. While there, though, the Je’Daii managed to track them down. While escaping, Shae Koda got the drop on Xesh, but was attacked by a giant monster. He dove into the waters below to save her and then took her as his captive. 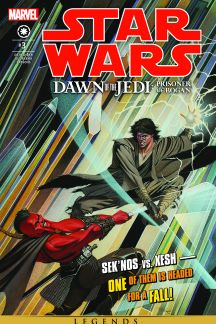 Back on Tython, research into a recently discovered Holocron informed the Je’Daii of the looming threat known as the Rakatan Infinite Empire. An ancient race called the Kwa, who inhabited Tython many years prior, visited the Rakata homeworld via an Infinity Gate, giving them tech and information about the Force, which the Rakata then used to dominate every planet they came across. The Rakata wanted the Infinity Gates, but the Kwa destroyed most of the portals to keep the Rakata at bay. With this in mind, the Je’Daii decreed that Xesh and Lok be brought back to Tython to prepare for war.

By that point, Lok, Xesh, and a Mind Twisted Shae had traveled to Shikaawa in another effort to raise an army from those once loyal to Queen Hadiya. However, that seemed unlikely once it was revealed that Lok actually killed the queen. After, Xesh and Lok fought against the Je’Daii, though even the Bogan fugitives fell apart when Lok tried to say he controlled Xesh. 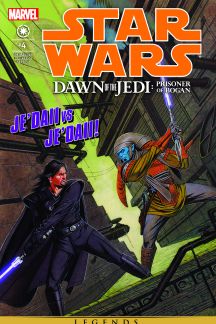 With Lok downed and Shae talking Xesh out of killing him, the group made their way back to Tython where the Council needed to take Lok’s visions seriously. To that end, they began making Forcesabers in their own forge, placing themselves on a dangerous path towards the Dark Side.

Trill and Xesh were brood mates, which meant that they’d been taken in as slaves by the Rakatans at the same time. Thanks to a feeling in the Force, the young Trill stood up for Xesh, another child among grown ups who intended to harm them. The two would make a blood pact to watch out for each other as they grew up. 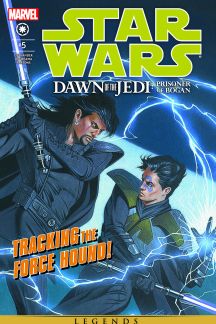 Their master, Predor Tul’Kar, made them fight—and Xesh beat Trill. He was then ordered to kill her, but Xesh suggested gifting Trill to Tul’Kar’s superior Predor Skal’Nas, which Tul’Kar agreed to with relish. Trill saw this as a humiliating betrayal, even though Xesh clearly did it to save her life.

Trill managed to infiltrate the Je’Daii by saving Sek’Nos Rath on Krev Couer, and when she brought him to Shikaawa to help stop Xesh and Lok, she was welcomed with open arms. After she realized that Xesh didn’t recognize her, she sent word back to her master that his memory blocks on Xesh worked and gave them the coordinates for Tython. With that information, the Infinite Empire set course for the Je’Daii stronghold, which led straight into DAWN OF THE JEDI – FORCE WAR.