After the mind-boggling adventures in the first two volumes of STAR WARS: KNIGHTS OF THE OLD REPUBLIC, things did not slow down for young Padawan Zayne Carrick. The young Jedi-in-training found himself in a sticky situation as the series launched when his supposed protectors, a group of Jedi Masters, killed the rest of his class and framed him for the murders. On the run, he joined forces with the always-hustling Gryph as well as genius, but not-all-there scientist Camper and his protector Jarael. As “Days of Fear”—from KNIGHTS #13–15 by John Jackson Miller and Brian Ching— began, Jarael and Camper decided to go one way while our hero and his less-than-upstanding partner continued on their own mission.

After seeing his companions off, Zayne met up with Gryph who had arranged for a ship to meet them, one flown—actually stolen—by the Trandoshan Slyssk. Thanks to some trickery orchestrated by Gryph, Slyssk shifted from weaseling out of their deal to pledging his life to his new “Ghrakhowsk” or lifedebt holder. 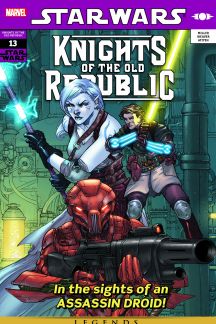 As it turned out, the stolen ship—called Little Bivoli—worked as a military provisioning vessel, so after takeoff the crew became swept up in a convoy that took them to Serroco and an opportunity that Gryph just couldn’t pass up. Putting aside his desire for ill-gotten gains, he actually opened a restaurant that fed the camped-out army, bringing in a pretty penny in the process. None of this sat well with Zayne who didn’t want to get spotted by all of these military folks who might turn him over to the Jedi. However, after having a vision of the Mandalorians destroying much of the planet, he did everything he could to get word to Admiral Karath. Unfortunately for him, the Admiral figured Carrick as a spy and didn’t listen to him, leading to the near destruction of Serroco.

Luckily, the Padawan’s new friend and pilot Lieutenant Carth Onasi did pay attention and sent word down to the surface that they might want to go underground. He didn’t know if it worked or not, but the effort made Zayne feel a bit better as he awaited the next stage in his adventure-filled existence.

Though not a main part of this story, Jarael and Camper did play a bit into these issues after splitting from Zayne and Gryph. With the duo in hyper space, a murderous droid called HK-24 awoke and nearly cleared the ship of all life until another droid, TI-LB, came online. He bought enough time for the Mandalorian stowaway Rohlan to finish the job.