A peacekeeping mission goes astray for the Jedi!

Between the events of “Star Wars: Episode I – The Phantom Menace” and “Star Wars: Episode III – Revenge of the Sith,” the Jedi contended with the rising power of their ancient foes as well as unknown forces attempting to manipulate their affairs from afar. Of course, the two would turn out to be directly related, but power struggles and the tumult of war muddled the Council’s ability to decipher the threats.

“Emissaries to Malastare,” published in issues #13-#16 of 1998’s STAR WARS, by Tim Truman and Tom Lyle, takes place just after “The Phantom Menace” in Legends continuity and focuses on a mission by the Council to bring peace to the planet Lannik. During a meeting of the Jedi, Adi Gallia brought up the troubles between the planet, which was the home of fellow Jedi Council member Even Piell, and local a terrorist group called Red Iaro. The aggressors agreed to a truce, which would be expanded upon by six Jedi representatives during a meeting on a neutral planet called Malastare. Chancellor Palpatine requested that only Council Members go, so Ki-Adi-Mundi, Even Piell, Adi Gallia, Plo Koon, Yaddle, and Mace Windu volunteered for the mission. 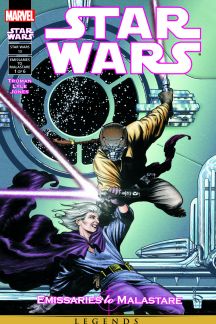 Malastare concealed plenty of dangers for the assembled Jedi, as planet Senator Aks Moe worked behind the scenes with Myk’Chur Finux Zug—leader of the Red Iaro and old enemy of Master Piell—to manipulate the peace proceedings. The talks between Zug and the mostly reprehensible Lannik leader Prince R’Cardo Sooflie IX were strained to begin with and weren’t improved by the presence of the Jedi, who were not respected by either side.

With the talks crashing to a halt, the Jedi traveled to their quarters. Instead of a peaceful ride near the local podrace track, they instead found themselves betrayed by Red Iaro spies who intended to blow them up. Though surprised, the Jedi proved adept enough to survive the attack. Once safe, the Jedi discussed the situation, positing that the Red Iaro intended to make it look as though the Lannik prince betrayed his own people, which would shift the power dynamic into the Red Iaro’s favor. 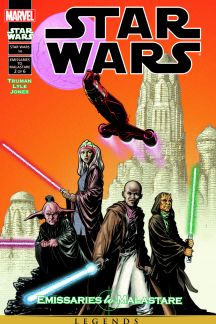 With the larger plan scuttled, Zug led the Red Iaro into the Prince’s chambers to put a murderous end to the negotiations when the Jedi burst through a window to stop the plot. Seeing his plan falling apart, Zug used a jetpack to escape, but wound up flying straight into a podracer turbine. With that, the peace talks came to a close and the Jedi Council members returned to Coruscant—except for one.

Zug, leader of the Red Iaro, utilized a pack of creatures called akk dogs to generate fear within his foes. The abuse of these animals disturbed Mace Windu, who explained that the creatures came from his home planet of Haruun Kal and were capable of good, depending on the training they received. This connection led Mace into his next adventure on the smuggler’s moon of Nar Shaddaa in STAR WARS #17–#18, by Truman and John Nadeau. 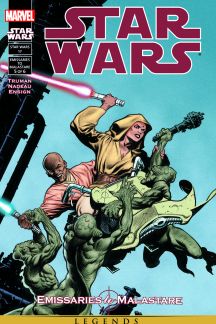 A moon of the Hutt capital world Nal Hutta, Nar Shaddaa proved dangerous, even for Windu, so he welcomed the assistance of fellow Jedi Council member (and his one-time Padawan) Depa Billaba. The duo received unexpected assistance from a third Jedi, Quinlan Vos, who guided them to the lower depths of the moon where they found mutated and brainwashed akk dogs forced to fight for entertainment.

After unsuccessfully attempting to commune with the creatures, Windu and Billaba were forced to confront the dogfight’s sponsor, Gargonn the Hutt. He passed the blame, of course, but with his enterprise in shambles and the audience rioting over unpaid bets, Mace and Depa hoped that the akk dog issue would be solved for good.