“Return of the Jedi” might have made it seem like Emperor Palpatine’s story ended at the bottom of an enormous shaft, but comic readers know differently. Darth Sidious used cloned bodies to restore himself in the pages of DARK EMPIRE and then continued making trouble for the Rebel Alliance in DARK EMPIRE II. Now, with EMPIRE’S END, Luke Skywalker and his crew finally get the upper hand.

In this two issue series from 1995, Tom Veitch and Jim Baikie laid the stage for the Emperor to further solidify his power base and finally crush the opposition with only Luke Skywalker and his burgeoning Jedi Order. To topple the Empire, though, they need to battle each other face to face! 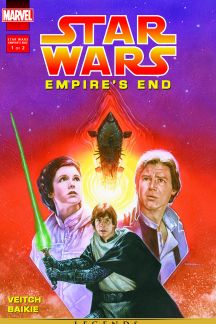 Armed with a weapon called the Galaxy Gun, the Emperor could destroy targets all over the cosmos without leaving Byss and did exactly that with the Alliance Troopship Pelagia, killing a hundred thousand in the process. Palpatine used the fear this weapon spread to bring more and more planets under his rule.

The Emperor almost finished off the Alliance completely with the weapon, but the missile proved a dud. That bit of luck saved Luke, Leia, Han, their three children, Chewbacca and the droids from utter annihilation, but it also gave the good guys a chance to examine the technology before fully evacuating the planet.

Luckily for the Alliance, the Emperor resided in a flawed clone body thanks to Luke destroying his stockpile. In need of Jedi genes to restart his clone project, Palpatine sent his people to Ossus. At the same time, Luke and a few Jedi decided to scout that same planet – inhabited by descendants of Jedi – to use as their new headquarters.

Luke and company arrived just as the Stormtroopers left with their genetic raw material. Before long, though, they crashed into the stronghold on Vjun to save the inhabitants of Ossus and also put a stop to Palpatine’s schemes once and for all. They fought a valiant battle that lead to the incarceration of Palpatine’s right hand man, Sith Lord Xecr Nist before the Jedi took off for Korriban to finish the mission.

Palpatine hoped that the Sith necropolis in the Valley of the Dark Lords would sustain his crumbling body, but soon realized that his best bet would be to inhabit the body of Han and Leia’s newborn son Anakin. So, he ordered his people to give chase and follow their ship.

After more planet-hopping, space chases and feints, the Emperor finally tricked his way into the place Leia hid with her children. She used her own Jedi abilities to hold him back, but the Sith Lord overpowered her and almost walked away with the child. The Jedi burst in to save Anakin, but not all of them lived to tell about it.

At the end of the battle, though, the Alliance won the day, the Emperor ceased to be and the galaxy became a better place, at least for a time.

EMPIRE’S END saw its characters jumping around the cosmos, including the planet Vjun. This one’s interesting because it marked the location that Darth Vader built his own personal palace, Bast Castle. The former Anakin Skywalker used the place as a sanctuary, but after his death it stood empty for a time. As seen in this story, though, it’s existence became known. The location proved intriguing enough that it’s been used in video games like “Star Wars Battlefront: Elite Squadron” and “Star Wars: Jedi Knights – Jedi Academy.”