Her highness and Jar Jar Binks go on an unexpected adventure!

Queen Padme Amidala may not have been the best judge of character when it came to choosing people to fall in love with, but she often demonstrated great care and understanding as a leader, with lines like “There is no need for violence” and “All things have value.” She spoke these platitudes in STAR WARS: EPISODE I – QUEEN AMIDALA, which came out around the time of “The Phantom Menace” film in 1999. Written by Mark Schultz with art by Galen Showman, the one-shot takes place between scenes of “Episode I” on Tatooine before little Anakin Skywalker prepares to drive a podracer in a contest that could win the hyperdrive generator that Amidala needed to repair her ship.

Padme expressed her concern for Annie’s safety, but also for the rough life he lived on planet as a slave. As she trailed off, thinking she’d failed as a leader for assuming slavery had been wiped out across the worlds, Jar Jar Binks witnessed a fly-like creature swoop down and snatch a piece out of Annie’s ‘racer. The runaway Gungan literally ran into Amidala as she wandered and wondered. Not quite understanding the situation, she came along in an effort to keep Binks from getting captured by the slavers. 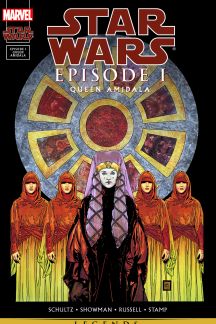 The ensuing chase left the Naboo natives with some angry Gamorrean guards on their tails, no battery retrieved, and a stolen speeder that Padme hotwired to escape the first problem. However, they did snatch one of the flying Trooshtis. While Jar Jar wanted to eat it, Padme spared its life and treated it well in hopes that it would explain why it stole the battery in the first place. In their attempts to regain the item, the duo wound up outside a decrepit moisture farm, much like the one Padme’s son would live in years later. Once there they discovered that the Trooshti had built an entire colony around a surprise wellspring of water.

Padme soon ferreted out the reason for the thieving of the battery: They needed it to power a pump that brought up the water they built their world around. The Queen of Naboo offered to help fix the problem, but the Trooshti had to deal with the Gamorrean guards attempting to sneak up on them. Jar Jar and the swarm worked well together to flush the Gamorreans away as Padme fixed the pump. To the royal’s surprise, one of the Trooshti pulled the battery out and flew off. Padme and Jar Jar gave chase, leading back to the podracer garage where it replaced the missing part in Anakin’s vehicle.

If it’s been a while since you watched “Phantom Menace” and would rather read the story instead of watch it to see what happened with Anakin, the podrace, and the rest of the saga, you can always check out STAR WARS: EPISODE I – THE PHANTOM MENACE. This four issue limited series took George Lucas’ original story and saw it adapted through the comic minds of Henry Gilroy and Rodolfo Damaggio.

Next week, find out what Grand Admiral Thrawn had in store for Han, Luke, Leia, and the rest of the New Republic in STAR WARS: HEIR TO THE EMPIRE.