Find out how things would have gone differently if Luke had died on Hoth!

As you’ll remember from our exploration of the first entry in the series, STAR WARS INFINITIES took a “What If?” approach to the characters and themes of our favorite sci-fi universe. In the case of the second volume, titled STAR WARS INFINITIES: THE EMPIRE STRIKES BACK, one huge event from that film causes crazy ripples throughout the story as Han Solo failed to save Luke Skywalker out in the frozen wasteland of Hoth!

The four issue series that debuted in 2002 by Dave Land and Davide Fabbri started with the familiar scene of a Wampa attacking Luke and his Tauntaun. He even escaped into the frigid clime where Obi-Wan told him to visit the Dagobah system and meet Yoda. By the time Han got to him, Luke mentioned that and then died.

Han took this as a request by his dead friend to go and learn from the Jedi Master. As Darth Vader and the Empire attacked the Rebel station, Han, Leia, Chewbacca, R2-D2, and C-3PO took off in the Millennium Falcon, but needed to stop at Cloud City and get some help from the smuggler’s old pal Lando Calrissian. Given the altered time table, they get to Bespin ahead of Boba Fett and throw down with him when he tried to muscle Lando. Calrissian helped defend his friend and got the Falcon on its way only to discover that Fett actually worked for Darth Vader, not Jabba the Hutt as they originally assumed.

Vader, assuming Cloud City allied itself with the Rebellion, used his fleet to knock the floating land mass out of the sky. Meanwhile, the Falcon landed on Dagobah and Yoda dropped a knowledge bomb on Leia in regards to her familial relations. She agreed to stay there and train while Han returned to the stars in an effort to clear his debt with Jabba.

Three months later, Leia exhibited impressive Jedi skills. At the same time, Vader continued searching for Luke, believing that he still lived while Han and Chewie made their way to Tatooine in an effort to pay Jabba off. Instead, a sneak sold them to some of the Hutt’s goons. Instead of accepting the payment, though, the crime boss had them locked up for stealing from him. 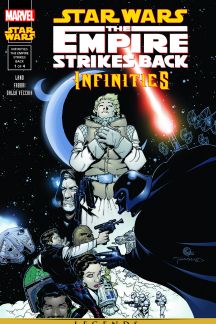 Jabba dropped the duo in a familiar pit with some hungry Nexu, but Artoo managed to sneak around and open the gate to free his pals. In their escape, though, they had to leave Threepio behind. They’d grow to regret that, as Vader grabbed his one-time droid from Jabba and used him to find his prey.

Vader landed on Dagobah and battled Yoda on the physical and mental planes as Leia searched for her lightsaber’s crystal in a nearby cave. At this same time, Han, Chewie and Artoo landed the Falcon nearby. They show up just in time to blast Vader in the face as he threatened to kill Leia. Unfortunately, Master Yoda remained far less lucky and perished in the conflict. With one Sith Lord out of the way and a fully trained Jedi ready to fight, they left to carry on the Rebellion’s war with the Empire!

This series finally dug into one of the elements of the series that people had been wondering about since the prequels revealed that young Anakin Skywalker created C-3PO. After Vader got his cybernetic hands on the droid, he asked if Threepio remembered his maker. “I no longer have that memory, sir,” the droid responded. “I’m afraid that information was lost long ago.” Vader then revealed the truth, but the robot remained true to his more recent masters. That is until Vader took his head off, fiddled around and got the truth!

Next time we’ll get into another kind of alternate Star Wars history, the one from the original Marvel comic series!