Four tales of Tatooine’s number one gangster at his worst!

It’s easy to see a character portrayed on screen and not think much beyond the few minutes you see. In the case of “Return of the Jedi” heavy Jabba the Hutt, we saw a big dude lounging around a palace adorned with Solo-filled artwork who had a nasty temper, enjoyed trips to the Sarlacc Pit, and got strangled to death by Princess Leia.

But there’s so much more to the character as seen in a quartet of separate Jabba one-shots from the mid-90’s by Jim Woodring and Art Wetherell: THE GAAR SUPPOON HIT, THE HUNGER OF PRINCESS NAMPI, THE DYNASTY TRAP, and BETRAYAL. Though not clearly tied together on the surface, each acts as part of a four-part story that should be read in that order.

In GAAR, the infamous gangster met with Gaar for a business ceremony called the Jubjub. After watching some creatures battle one another for sport, the two nasties sat down to go over the terms of their deal. As you might expect, the proceedings veered pretty far away from fair into the arena of treachery. Still, Jabba proved that you cannot trick a trickster as he displayed just how deeply he knew his enemies and the people around him, and used that information for his own gain! 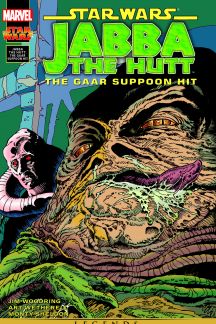 HUNGER picks up immediately after GAAR with Jabba and his crew attempting to take over the Nuffin Freighter they come across. Instead of an easy plunder, though, they came face to face with Princess Nampi, a creature even larger and more grotesque than the Hutt! She tossed Jabba in the brig, wanting both his protected spoils and his number two Scuppa for her bed chamber! Neither quite went according to plan for her and Jabba walked away with a few additions to his own booty.

From there, Jabba traveled into the events of THE DYNASTY TRAP where he fell square into the middle of a family feud of epic and bloody proportions. Finally, the crew returned to Tatooine where Bin Fortuna planned to finally exact revenge on Jabba for years of torment, but plans like that do tend to fall apart—especially when other people try to kill the same target!

Everyone remembers Bib Fortuna as the Twi’lek who kept a close watch on Jabba the Hutt in “Return of the Jedi.” As the Hutt’s right hand man, he stood by as Luke Skywalker defeated the Rancor and the Sarlacc pit endeavor failed to go as planned. He also appeared in “The Phantom Menace,” once again alongside Jabba the Hutt, this time as they gathered in the gangster’s private box to watch the pod racing scene!

Next, behind-the-scenes hi-jinks return in the second installment of Tag and Bink stories from Kevin Rubio and Lucas Marangon.